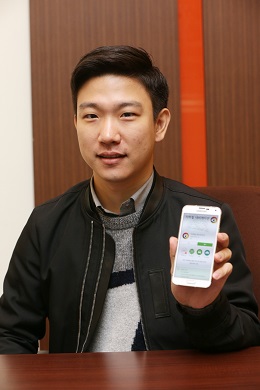 A college student donated to his school a part of the proceeds he collected from developing a smartphone application.

Oh Seung-gyu, a senior majoring in electronic engineering at the Korea Advanced Institute of Science and Technology (Kaist), gifted 30 million won ($26,000) to the public research university, a record donation by a student currently enrolled there.

The 27-year-old developed Subway Navigation, an app that provides users with train schedule and transfer information, in 2010 after entering college.

He graduated from Kaist’s Korea Science Academy in 2008.

Oh originally made the app to use on his own but later distributed it for free on the Android app market.

“I made the decision because I’d like to give back what I received from the school,” he said.

Following his graduation from Kaist, he plans to work at the tech company and incorporate the app into the business there.

“I think I’ve benefited from advantages and privileges from the school and country, like the exemption of tuition,” he said. “So I always wanted to give back a part of my earnings for a good cause.”