More than 100 residents in Kapchorwa District, Uganda, regained their sight thanks to Vision Care, an international organization that provides free cataract surgeries to people in developing nations. [SUNG SI-YOON]

Earlier this month, in the yard of a local hospital in Kapchorwa District, eastern Uganda, Anna Ipsalimo expressed her gratitude for the Korean doctors who cured her of her cataracts.

“I was blind for the last eight years, and now I can see. I want to send my thanks to God and the Korean doctors who cured me,” said the 32-year-old, who still had the telltale bandages of her surgery over both eyes.

As she finished speaking, 104 residents from the district broke into applause. They, too, had received operations at the hands of the physicians from Vision Care, an international eye care organization.

Founded in 2002 by Dr. Kim Dong-hae, the director of the Myung Dong St. Mary’s Eye Center, the group works to help the blind in underdeveloped countries and has since established branches in Ethiopia, Uganda, Vietnam, Pakistan and Mongolia. 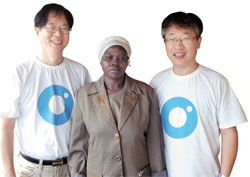 Over the past year, Vision Care has conducted 27 volunteer missions, and until now, the organization has performed 16,500 surgeries in 34 countries in Asia, Africa and Latin America.

Six doctors, four nurses, one optometrist and three administrative personnel participated in the trip to Kapchorwa.

“I participated in a volunteer mission led by Vision Care in Sri Lanka three years ago,” said Dr. Kim Duk-soo, 46. “I never forgot how moved I was at the time, so I closed my hospital for a week this time around to participate [in Uganda].”

Cataracts are a clouding of the lens in the eye that leads to visual impairment. Although patients can regain their sight with an operation, it is hard to get the surgery in underdeveloped countries like Uganda, which only has some 45 eye doctors in a population of 34 million.

Kapchorwa District is somewhat remote compared to other parts of the country: It is located in an alpine area at an altitude of 2,000 meters (6,560 feet), some eight hours from Kampala, the capital.

Houses and public facilities in the area have no electricity, and the hospital is the only facility available to provide care to the district’s 7,000 residents. The hospital has four doctors, but there is no ophthalmologist or medical equipment for eye care.

Vision Care had to transport necessary medical equipment from Korea. It also publicized its visit on a local radio station three times before it arrived. Additionally, power for electricity was paid for by the organization to operate generators in the hospital.

Among the patients who had operations, Ipsalimo was relatively young. She married at 17 and has a 15-year-old son, but she was forced to move back in with her parents after her husband left her when she lost her sight.

She runs a clothing shop with her younger sister but could not do much due to her poor vision.

When she came to the hospital, the lens of her eyes had already turned white.

“There aren’t patients like her in Korea because people get surgery before the illness progresses,” Kim said.

Ipsalimo was only able to detect minute movements when doctors waved their fingers in front of her face, and she was unable to see how many fingers they were holding up.

After the surgery, however, she has regained sight in her right eye to some degree and most of her sight in her left.

“About 90 percent of the blind in the world are from underdeveloped countries,” Dr. Kim Dong-hae said. “Cataract surgery can give them a new lease on life.”