Behind many a successful start-up is its accelerator

Behind many a successful start-up is its accelerator 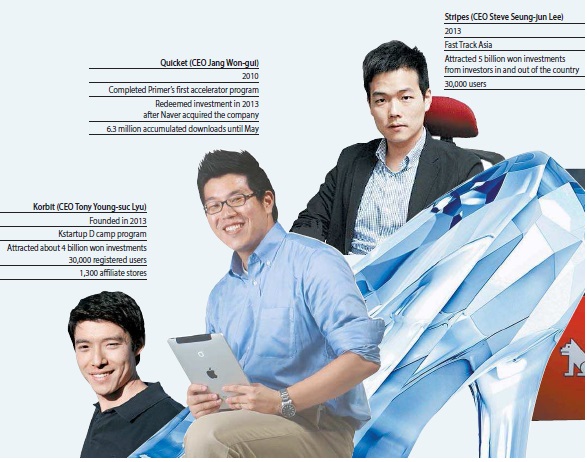 Kim Yoo-jin, a 38-year-old director of SparkLabs, left on a business trip to Tokyo Monday morning to attend Demo Day on Tuesday. Demo Day is a conference where start-ups give presentations on their technology and business strategy to potential investors. For this year’s Demo Day, Kim spent the last three months preparing the pitches for eight start-ups, including Wahome, a platform that connects homeowners with domestic workers.

Kim is an accelerator, whose very role is to make the difference between start-up success and failure.

Before joining SparkLabs, he worked for Tencent Korea and an American branch of NHN. He was the CEO of a start-up in the past. Now, he looks over the progress of other start-ups and tries to connect them with appropriate mentors. Sometimes, he advises start-ups on their entries into overseas markets.

“We interview 200 to 300 teams for each round of investment choices and select eight to 12 teams to invest in,” Kim said. “Once the finalists are selected, we not only fund the start-ups’ seed money but also support them throughout their early years so they can grow.”

While hundreds of companies rise and fall, “start-up Cinderellas” - those who manage to pull in investment and survive or enter overseas markets - are the ones the public gets to know. They often have been mentored by accelerators.

Accelerators pick the right start-up teams and press the right pedals at the right time to accelerate their growth.

Accelerators’ roles are similar to those of judges at talent reality shows like “Superstar K,” who winnow down the contestants and help select the final winner. Since the staff of accelerators are mostly first-generation CEOs of start-ups, they themselves have gone through either huge success or failure with their own business. The insights earned from hands-on business experience are passed down to promising rookies. Aside from SparkLabs, other well-known accelerators in Korea who have had successes with start-ups include Primer, Kstartup, Fast Track Asia and Bigbang Angels. 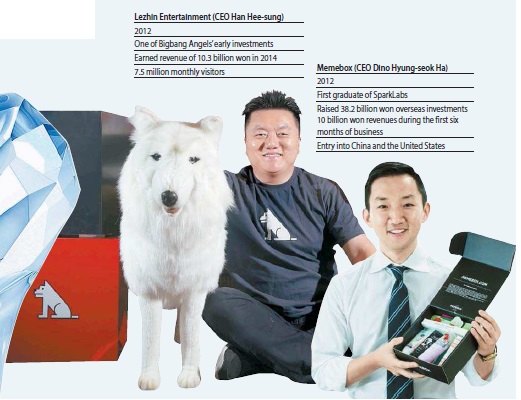 According to Accelerator Leader’s Forum, a consultative group of accelerators established last year, 23 accelerator companies are operating in Korea. In Silicon Valley, where the accelerator business was born, hundreds of accelerators are actively operating. Some say that they are taking on the role of a graduate school of business administration.

The aggregate market value of the start-ups invested in by Y Combinator, the United States’ flagship accelerator, has reached 50 trillion won ($43 billion). Its investments include Airbnb and Dropbox.

The major role of an accelerator is to assess the potential of each start-up, invest in those that are promising and help them grow. Competition is fierce, with only one out of 10 to 20 start-ups making it to the final investment selection. However, once a start-up is chosen by an accelerator, it has taken an enormous stride. Recognition of the business idea or the talent of the team is one element. Even more important is the initial investment, which can be anywhere from 15 million won to 100 million won.

In general, start-ups get ready to go out into the world after three to six months of training provided by the accelerator. Through this training period, the accelerator uses its networks to introduce industry leaders to the start-up and invite trainers to help it with basic business management subjects such as marketing, finance and accounting. This investment process differentiates accelerators from first-generation venture capitalists or existing angel investors, who count on a start-up’s prospective revenues or profits to make their investment decisions.

“When we select start-ups for investment, we first look at the technical capabilities of the team and also their ability to solve problems they are facing,” said Lee Jeong-hoon, a team leader from Primer, the first accelerator in Korea.

Accelerators started Demo Day, where start-ups demonstrate their technology or business idea along with their strategy to attract investors. Demo Day is like an onstage audition: the start-up shows the world what it’s made of. Investors look for good talent and well-conceived presentations, but who made the initial investment is another big criterion since it raises the credibility of the start-ups. 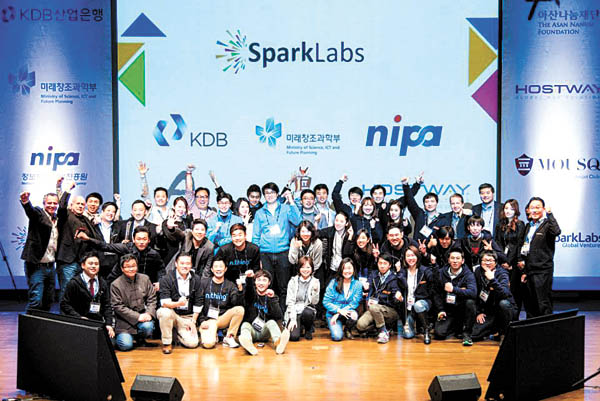 Graduates of SparkLabs pose for a photo after a Demo Day held in June. [SPARKLABS]

The accelerator business is fairly new to Korea. The first accelerator in Korea is Primer. It was set up by first-generation members of successful start-ups in 2010. Its promise to other start-ups: “We will pass down our entrepreneurial DNA to our juniors and support their success.” Primer’s luminaries included Kwon Do-gyun, who nurtured Initech and Inisis and listed them both on the Kosdaq market; Lee Jae-woong and Lee Taek-kyung, co-founders of Daum Communications; and Lee Gwang-seok, founder of Incruit.

The company focuses on start-ups in the information and communications technology sector, including companies working in software and mobile. Start-ups nourished by Primer include StyleShare, a fashion platform that boasts 1.5 million users, and MyRealTrip, a travel platform that earned investments from U.S.-based Altos Ventures with its business model emphasizing real trip experiences with local tour guides.

The work process of accelerators is selecting promising start-ups, providing them facilities, investing seed money, providing teaching sessions and setting up a Demo Day. SparkLabs set up the model, which echoed the history of Y Combinator.

SparkLabs, which started in 2012, attracted attention by fostering several star companies such as Memebox, MangoPlate and 5Rocks. Memebox raised $33 million in investment from companies in and out of the country in two years. What started as a digital transaction platform is now producing its own line of cosmetics. The value of the company is thought to be $100 million.

Kstartup is operated by Prof. KJ Byeon from Ajou University and supported by Hyundai HCN.

Korbit, which operates the largest Bitcoin exchange, raised funds from renowned investors from Silicon Valley, including Tim Draper and SV Angel. Malangstudio, an app that gives personal alarms to users, was acquired by Yellow Mobile, a renowned mobile business platform. Leferi, which offers beauty-related content on a multi-channel network, was acquired by Treasure Hunter, an emerging mobile content provider. Both deals attracted great attention in the industry due to their growth potential. All three start-ups went through accelerator programs by Kstartup.

Some companies categorized as accelerators manage start-ups as if they are their own subsidiaries. Fast Track Asia - established by Shin Hyun-sung, CEO of Ticket Monster, and investors in Ticket Monster - aims to build start-ups into listed companies.

According to the manager of Fast Track Asia, Jeon Ah-rim, the involvement of the accelerator in each start-up is comparatively deeper, since the company’s aim is to list start-ups on the stock market. “We invest in our start-ups with the goal of building two to three actual companies a year,” she said.

Two rookies that the company is focusing on include Fast Campus, an education provider for adults, and Fast Five, a start-up offering office space to other start-ups. Stripes, a menswear start-up fostered by Fast Track Asia, raised 5 billion won in investments.

Bigbang Angels is also an active accelerator. A total of 25 start-ups received 10 billion won worth of funding from the company, including Lezhin Entertainment, a web cartoon service provider.