Responding to the introduction of Ikea in Seoul, the Nonhyeon style shop in Seoul by Hyundai Livart. [Hyundai Livart]

They were concerned about the impact on their businesses of a company with 38 trillion won ($33 billion) yearly sales and a reputation for reasonable prices, modern styles and diversity, as well as a marketing pitch of “selling lifestyle.”

As Ikea’s one-year anniversary of opening in Korea approaches, many believe it has brought both good and bad aspects to the market, and many companies have met the competitive challenge.

Ikea made the industry wake up to the accessory market.

Ikea opened its first store in Gwangmyeong, Gyeonggi, last December. The store has more than 8,600 products on display. It has become the mecca of accessories. 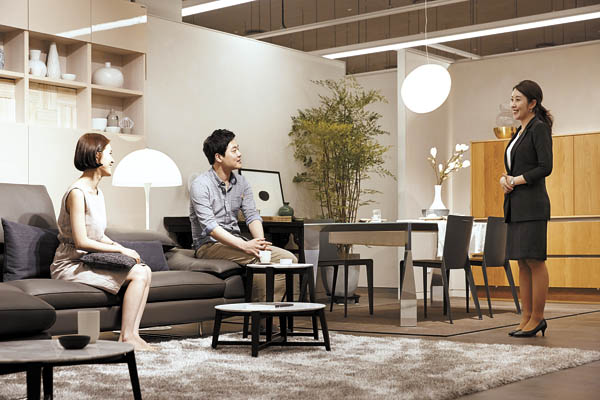 Responding to competition, the flagshop of Hanssem opened in Daegu that designed the shop like a model house. [Hanssem]

Hyundai Department Store has decided to make one floor of the Livart Seoul Nonhyeon Style Shop an accessory flagship store. “We will expand the number of accessories from 1,600 now to 4,000 by 2017 and approximately 5,500 by 2020,” said Eom Ik-Su, a director at Hyundai Livart.

Hanssem, the nation’s largest furniture manufacturer by sales, has benefited most from Ikea. Hanssem’s sales for the first half of this year went up to 770.2 billion won, which is the largest amount in the company’s history. It increased 30.3 percent compared to the same period last year. Hanssem’s profit also rose 42.2 percent to 66.3 billion won.

“It is true that Ikea is a superpower in the market. But Ikea has its strengths and weaknesses at the same time. We are doing well in this fight,” said Choi Yang-ha, Hanssem’s chairman.

Hanssem says it targeted Ikea’s weak points. The company acknowledged that Ikea customers are not satisfied with delivering and assembling products on their own, and decided to offer delivery and assembly service. Hanssem also built stores in the inner city area to increase accessibility, as Ikea stores are normally located far from downtown areas.

“Recent furniture industry developments are driven by local brands who know the needs of Korean customers. Hanssem has worked on its strategies ever since it learned of Ikea launching in Korea,” said Lee Yong-won, the secretary general at the Korea Furniture Association.

“Manufacturing quality products is necessary to gain customers’ interest,” said Kim Kyung-soo, chairman of Emons, at an exhibition last spring. In return, Emons launched an online store to expand its target customers from the 40-50 age group to the 20-30 age group.

Emons lowered the price of products that are focused on the younger generation while still using the same materials used in high-end products. The company’s current concept is “Eco Prestige,” which means Emons is manufacturing prestigious furniture with eco-friendly materials. The approach appears to be paying off, as Emons increased its sales by 30 percent during the first half of this year.

In business, what Ikea has done to the Korean furniture industry is called the catfish effect, where a strong competitor causes the weak to better themselves. The theory became famous after Samsung’s chairman, Lee Kun-hee, said it in 1993 when he emphasized “New Management.”

However, it is not just the local furniture industry that has been forced to become more competitive. Other global brands have also expanded their businesses in Korea.

Hyundai Motor and Kia Motors, which are in the top five in the world based on sales, were under pressure after foreign automotive brands were introduced in Korea.

The automotive market was first opened to foreign companies in 1987. Since then, their share has grown, and now their share is as high as 15.8 percent out of total sales in the nation.

After Mercedes-Benz launched its first store in Korea in 2002, luxury brands such as BMW and Audi followed.

Chung’s plan prompted Hyundai to introduce a premium sedan named Genesis to the market in 2008 and a new edition of Genesis was introduced in November 2014. Since then, there have been 105,915 cars sold and 53,254 exported by the end of November.

Hyundai also changed its former premium sedan named Equus (EQ) to Genesis. “Genesis EQ900,” which will be released next month, has received a total of 4,342 pre-orders on the first day it started receiving orders.

“Launching a separate Genesis luxury brand is a new start for Hyundai,” said Chung Eui-sun, vice chairman of Hyundai Motors, at its launching event held earlier this year. “Being satisfied with what we have now is not Hyundai’s style.”

The retail industry also had its share of uneasiness when Walmart, the No. 1 retail store in the world, moved into Korea.

Local stories worried they would not be able to survive, but, in fact, Korean supermarket chain E-Mart managed to buy Walmart Korea. E-Mart focused on meeting Korean customers’ needs while Walmart was left with its warehouse-like style.