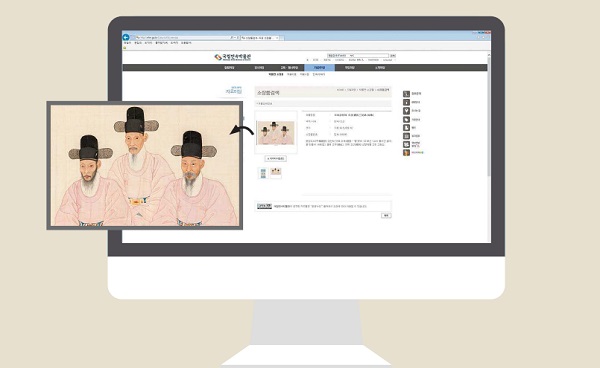 The National Folk Museum of Korea announced earlier this month that it has made 99 percent of its entire collection available online.

Of the 68,934 items in the museum’s collection, photographs and information about 68,033 items are now on the museum’s website, www.nfm.go.kr. The museum had to exclude some items due to copyright issues.

“Revealing a museum’s entire collection to the public is a first in Korea,” Kim Yun-jeong, a curator at the museum’s artifacts science division, said through a Nov. 4 press release. “As long as they identify the source, people can freely use the photos and information for academic as well as commercial purposes.”

Behind the museum’s efforts is the determination of museum director Cheon Jin-gi. He told the JoongAng Sunday in a recent interview that as a student of folk studies, he always had a thirst for credible, extensive data on folk items.

“Usually when people visit a museum, they are only seeing about 5 percent of the museum’s entire collection. Because of limitations in terms of space and time, there’s only so much a museum can show to the people physically. But it’s a different story, online.”

It is true that some of the photos and information on the items in the museum’s collection are not of the highest quality. The photos of some pieces are in black-and-white and low resolution, and the information on some is brief and even incomplete. In most cases these items are from the museum’s earliest collection. The museum opened in 1966.

For that reason, some curators were against uploading the information, Cheon said. “I gave it a lot of thought, but decided we don’t have to be 100 percent ready, as we will have to continue to update and upgrade the online database anyway. We may get some criticism, but we will take it as feedback and make improvements.”

It’s also true that for the National Folk Museum of Korea, the task was relatively easier and freer from opposition. Folk items tend to be less expensive than some other cultural properties, and the museum is home to just four state-designated Treasures.

On the other hand, the National Museum of Korea, which has about 370,000 items in its collection, has made only about 7,200 items available online. The museum is home to about 375 National Treasures and Treasures.

Other key artifacts in the National Folk Museum of Korea’s collection include “Old and New Celestial Charts,” Treasure No. 1318. [THE NATIONAL FOLK MUSEUM OF KOREA]

“It is our ultimate goal to make available online our entire collection,” Lee Hyun-ju, a spokeswoman for the National Museum of Korea, told the Korea JoongAng Daily. She didn’t elaborate on when, but said the task requires time.

Opening up government organizations’ database to the Korean public is in line with the Park Geun-hye administration’s policy directive. And the administration is also trying to induce participation from private museums, sources told the Korea JoongAng Daily.

Some of the private museums with best collections of ancient Korean masterpieces are the Horim Museum, the Leeum, Samsung Museum of Art, and the Kansong Art Museum. 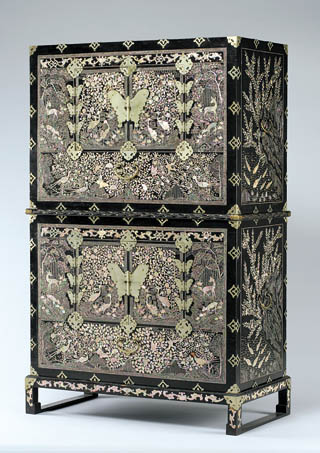 A two-compartmented chest. [THE NATIONAL FOLK MUSEUM OF KOREA]

Horim, which is home to some 15,000 artifacts, including eight National Treasures and 52 Treasures, already has information on these 60 state-designated cultural properties in its website. And since May, it has made available through the Google Art Project a total of 124 items in its collection, including the 60 cultural properties.

Kansong, which is believed to have about 5,000 items, including 12 National Treasures and 10 Treasures, surprised everyone in January of last year by joining forces with Naver to make available on the web portal about 600 items from its collection. Until then the museum had been extremely closed about its collection, holding just two short exhibitions a year.

The Leeum, Samsung Museum of Art, on the other hand, has posted about 450 items on its website, including contemporary art. Leeum’s entire collection size has not been disclosed, and the 450 pieces on the website are mostly those that have already been presented to the public through permanent exhibitions.

Relaxing digital policies is a trend for museums in Korea and abroad. From left: Part of the Kansong Art Museum’s collection can be seen through Naver; the Horim Museum made part of its collection available through Google; and the Metropolitan Museum of Art made more than 400,000 high-resolution images from its collections available for free download and noncommercial use. [SCREEN CAPTURE]

Inducing participation from private museums to make public their entire collection in cyberspace may or may not be successful, as these institutions have no obligation to do so.

But in what appears to be a trend worldwide, museums have been increasingly liberalizing their digital policies to promote themselves and at the same time drum up interest in their fields.

“Those days are gone when museums would boast their large collection sizes,” said Cheon of the National Folk Museum. “Today, it’s all about how museums utilize their collections. It could determine the museum’s future.”


Collection of the world

The Smithsonian Institution’s Freer Gallery of Art and Arthur M. Sackler Gallery, which are dedicated to Asian art, released their entire collections online on Jan. 1. More than 40,000 items from the galleries - many of them never before seen by the public - are now available to view online, in high resolution and without copyright restrictions for noncommercial use.

This follows New York’s Metropolitan Museum of Art’s announcement in May of last year that more than 400,000 high-resolution images from the museum’s collections would henceforth be available for free digital download and use in any noncommercial medium like social networking sites. In the same month New York’s Museum of Natural History also uploaded online more than 7,000 images as part of a large-scale digitization project that began in 2006.

The trend has also been spotted outside the United States.

The Vatican Apostolic Library, one of the oldest libraries in the world, has been digitizing its archive of ancient manuscripts and making them available to view free of charge through collaboration with the Japanese company NTT DATA.

The library has catalogued nearly 4,500 manuscripts online as of last year and hopes to catalogue about 10,000 more within the next four years. Eventually its goal is to digitalize its entire 82,000-document collection.

The British Museum also announced recently it has digitalized its archive and made it available to view for free. It worked with the Google Cultural Institute to let people view nearly 5,000 items in detail online, the largest such undertaking so far by Google.