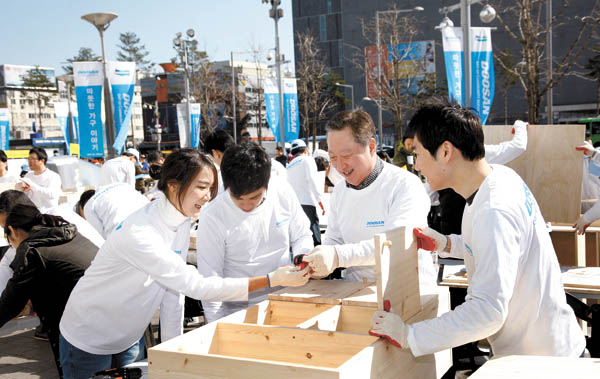 Doosan CEO Park Yong-maan and some 200 employees assemble furniture on March 23 to be delivered to underprivileged households.

Doosan Corporation is giving back to the communities it serves through various social activities.

Doosan’s representative corporate social responsibility (CSR) enterprise is the Doosan Day of Community Service, a day designated twice a year on which company employees here and abroad engage as volunteers in their local communities - donating food, cleaning up roadways or lending a hand in farming villages.

The group held its second Doosan Day of Community Service on March 23. Offices in 13 countries participated in the first event in October 2014, while 158 offices across 16 countries contributed this year.

The Time Traveler project, established in 2012, helps students in the capital from their second year of middle school to their first year in high school develop self-esteem and a positive attitude through artistic photography. Over the past three years, more than 250 students have completed the course.

So far, the Time Traveler project has been received positively by participants: 95 percent attended every session of the eight-month project. According to researchers in the Social Welfare Department at Chung-Ang University, the program had a significant effect on students’ emotional stability, self-regard and expectations for the future.

In November 2014, 300 photographs and essays from the course’s participants were displayed in the “Space & Contemplation” exhibition in Gana Art Gallery, Jongno District.

The photographs depicted scenes from around Seoul, including personal spaces like schools or small alleys, as well as the palaces and the city’s most popular streets. To reach out to more teenagers, Doosan has offered training sessions for middle school and high school teachers interested in the program since 2013.

Doosan Heavy Industries & Construction (DHIC) has also acknowledged the importance of giving back to local communities.

DHIC’s social activities frequently take place abroad, where many of its factories are located. The company operates a large-scale manufacturing facility in Vietnam and hosts most of its overseas events there. Along with volunteer medical services, scholarships and support for desalination facilities, Doosan organized a group of over a thousand local employees to engage in work tailored to each community.