With two Kims gone, a culture of cooperation fades away

With two Kims gone, a culture of cooperation fades away

Kim Dae-jung, left, and Kim Young-sam, right, meet at the Seoul Hyatt Hotel in 1985. Though the two leaders were political rivals, they cooperated in the pro-democracy movement and demonstrated charismatic leadership. [JOONGANG PHOTO]

The era of “competitive partnerships” that helped bring democracy to Korea officially ended with the death of former President Kim Young-sam.

While the legacy of the late Kim and his ally and rival, the late President Kim Dae-jung, is eulogized, political observers urged today’s leaders to establish a new political culture to end partisan obstructionism in the National Assembly.

Kim Young-sam, the first civilian elected president after two dictatorships, served from 1993 to 1998, and Kim Dae-jung, Kim’s lifetime ally and rival, succeeded him as president from 1998 to 2003.

They were known as the “two Kims” in Korean modern politics. The two Kims devoted most of their political lives to fight the rules of military strongmen Park Chung Hee and Chun Doo Hwan.

On May 29, 1979, Kim Dae-jung, who was under house arrest under the Park regime, headed to Aseowon, a Chinese restaurant in central Seoul. The opposition New Democratic Party (NDP) was scheduled to hold a convention the next day to elect its new president, and Yi Chul-seung, secretly backed by Park’s Korean Central Intelligence Agency, and Kim Young-sam were competing in the race. 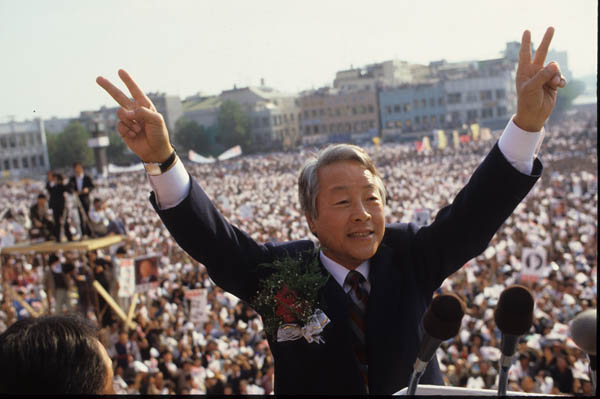 Presidential candidate Kim Young-sam takes the stump before a crowd of more than 1 million in 1987, at Suyeongman landfill in Busan.[JOONGANG PHOTO]

The October Yusin in 1972 refers to Park’s dissolving of the legislature and revising of the Constitution to pave a way for him to get lifetime power.

On April 12, 1971, Kim Young-sam headed to Geoje Island in South Gyeongsang. It was two weeks before the presidential election, and Kim stood before hundreds to give a speech.

“I am sad because I come back to address the people of my hometown and I am not a presidential candidate,” he said. “But I am a man and I made a promise. The people of Geojeo must vote for Kim Dae-jung, believing that you are voting for me.”

Kim Young-sam lost the NDP primary to become the presidential candidate in 1970, but he didn’t hesitate to travel around the country to stump for Kim Dae-jung. Park Chung Hee, however, still won the election on April 27, 1971.

“The era of political charisma has ended,” said Lee Won-jong, who served as senior political secretary in the Kim Young-sam Blue House and assisted Kim for 42 years.

“The people backed their fight against the military regimes,” said Rep. Moon Hee-sang of the opposition New Politics Alliance for Democracy. “In addition to that, they had regional ties, political money and power to make nominations for legislative election. When the two Kims decided their stances, their factions all submitted to it.” 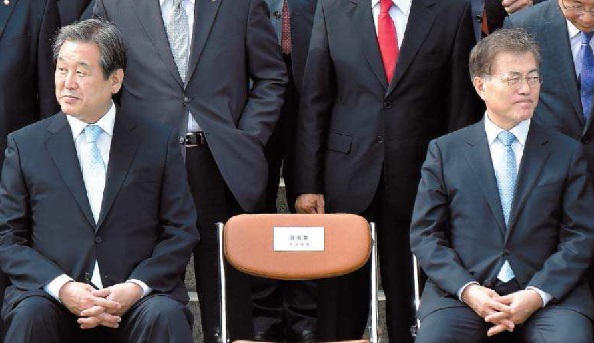 Saenuri Chairman Kim Moo-sung, left, and NPAD Chairman Moon Jae-in look away from each other on Sept. 1, during a group photo session at the National Assembly.[JOONGANG PHOTO]

On the flip side, the two Kims’ charismatic leadership is responsible for the negative legacy of “boss politics” and the era of the two Kims is also considered in Korea as something to be overcome.

But fourteen years have passed since their presidencies ended in 2002, and many people think Korean politics have not improved.

“I am a critic of their era,” said Sohn Ho-chul, professor of political science at Sogang University. “I even wrote a book on it. But I actually miss them these days.”

After the two Kims, who were strong advocates of the National Assembly’s role in Korean democracy, the legislature faced a leadership vacuum. As chaos dominates the National Assembly, Korean politics has failed to deal with pressing issues facing the country, such as the plummeting birth rate, aging society and youth unemployment. The ruling and opposition leaders sometimes strike deals, but then they go back to conflict.

“The leadership of charisma is actually leadership without a system,” said Lee, former presidential senior secretary for politics. “We should embark on an era of governance, and leave behind the era of political heroes.”

He said a top-down system was crucial when the stakes were high and dictatorship had to be confronted. But such a political culture no longer has relevance. “A political party must be open to the public so that more people can participate in politics,” he said.

For various members of the society to participate in politics, the cooperative partnership of the two Kims must be revisited, observers said.

“After their presidencies, politicians with similar abilities and reputations appeared,” said Im Hyug-baeg, professor of political science and diplomacy at Korea University. “The biggest problem was that the cooperative partnership no longer worked for them.”

Sohn Byoung-kwon, political science professor of Chung-Ang University, agreed. “A leadership must be created based on the ability to communicate, the ability to talk to the people with the same perspective and the ability to mediate a conflict,” he said. “Politicians with problem-solving abilities must start a competition of policies.”

“There is an old saying that you will face a tiger when you try to avoid a wolf,” Im said. “Because of the reaction against the politics of the [two Kims], Korea achieved decentralization of power, but political leadership has completely disappeared.”

He said regionalism was seen as the key problem left by the two Kims and many believe that Korea’s democracy will function smoothly without regionalism. “But it was wrong,” he said. “The pre-modern order, barely maintained by the regionalism, disappeared. When we ran away from regionalism, we faced anarchy.”

Sohn of the Chung-Ang University said leadership in the current era requires the abilities to communicate and create policies.

“What we need now is a leadership from the bottom-up,” said Sohn. “A leader must rise from the bottom of a political party and strengthen his or her abilities to communicate and solve problems.”

He said politicians in the United States and Europe often start from the bottom, but Korea rarely has few such examples.

Sohn Ho-chul of Sogang University said the late Roh Moo-hyun, who succeeded Kim Dae-jung as president, nurtured his leadership by gladly accepting defeats. “Roh called himself a fool,” Sohn said. “He didn’t follow the path of the two Kims.”

Sohn said politicians today fail to develop their own leadership model. “Politicians are now treating politics as their professions. They are just self-employed businessmen going after short-term gains.”

The ruling and opposition parties also need to end their practice of demanding the head of their chairmen when they lose elections.

“Korean political parties consider a strong leader anti-democratic,” said Lee Cheol-hee, director of the Dumun Political Strategy Institute. “When a political party elects its leader, the candidates had to go through extremely harsh competition, but once a leader is selected, he or she had to face demands to step down for any minor defeat. Instead of this practice, significant time and authority should be given to the leader to build a true leadership.”

“For a political leadership to function, the party must give enough time and power to the party chairman and allow him or her to take responsibility,” said Kang. “When a chairman of a political party is changed every four to five months, how can anyone perform as a leader?”

Im of Korea University said the political parties must also change to serve a changed environment.

“In the past, a political party belonged to its members,” he said. “But today, it communicates with the people through social networking services. It should become a party of its supporters, not just members. Instead of deciding candidates through a nomination committee, a completely open primary must be introduced.”

“Today, the political leaders fail to show true leadership because they are obsessed with their own individual interests,” said Yoon Yeo-joon, a well-known political strategist who served as environmental minister for the Kim Young-sam administration. “The concept of ‘publicness’ must be introduced to the Korean politics, and the value must be respected.”

“Although democratization is achieved inside a political party, decisions are made by a few, and the rest were ordered to follow,” said Yoon Hee-woong, director of the Opinion Live public opinion analysis center. “Without a charismatic leader, such as Kim Young-sam or Kim Dae-jung, this doesn’t work anymore.”

“Lawmakers must not act like henchmen of their factions. They must compete with their legislative abilities and expertise and make pragmatic choices,” Yoon said.

When a party makes a decision through a general assembly of lawmakers, a vote must take place to reflect a majority opinion, experts recommended.

“The lawmakers must remember the principle of a majority,” said Park Myoung-ho, political science professor of Dongguk University, criticizing the trend in major parties that no voting takes place at a general assembly of lawmakers.

“When all lawmakers speak their opinions at the assembly, the voice of a few extremists will lose its power,” said Rep. Sul Hoon of the opposition New Politics Alliance for Democracy (NPAD). “Who attends general assemblies of lawmakers and what they discuss must be made public and each lawmaker should be held responsible for their comments. Then, the problem will disappear.”

Lawmakers also say what they truly need, as much as a great leadership, is a healthy independence among the followers.

“When the president says something through the media, the party makes a platform similar to it, and a general assembly of lawmakers just endorses it,” said Rep. Park Min-shik of the ruling Saenuri Party. “Lawmakers must be able to freely express their opinions, just like the ‘Hundred Flowers Bloom Campaign’ of China. That is a proper political party and a healthy political party.”