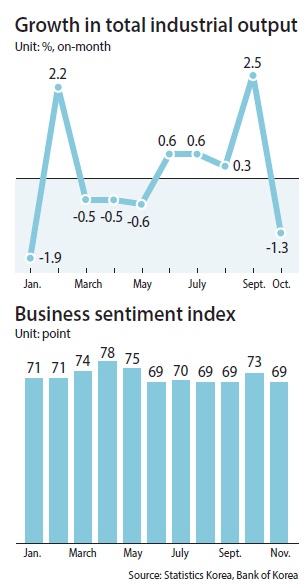 The government’s efforts to boost the domestic market appear to have been in vain, as economic indicators showed the situation has remained dire over the last two months.

According to Statistics Korea on Monday, the nation’s overall industrial output dropped 1.3 percent in October compared to September, falling by the largest percentage in nine months.

The main cause of the unexpected drop was weak exports, the statistics agency said.

According to the report, production in the mining, manufacturing, gas and electricity industries fell 1.4 percent month on month, compared to a 2.2 percent month-on-month gain in September.

The output of the automobile industry, including car parts, slid 2.8 percent, while that of chemicals fell 4 percent during the same period. Cars and chemicals are Korea’s major exports.

The service sector inched up 0.2 percent month on month, but that couldn’t cushion the 1.4 percent and 7.8 percent falls in the manufacturing and construction industries, respectively.

The Ministry of Strategy and Finance assessed in a report that domestic consumption is faring well, but sluggish exports affected the overall output in a negative manner.

“Retail sales showed the sharpest growth in 57 months thanks to the Korea Black Friday sale and consumption tax cut, but the October retreat in exports negatively impacted production and investment,” the ministry said.

The ministry plans to inject the remainder of the 9 trillion won ($7.7 billion) in its supplementary budget to vitalize the economy by the end of year.

Meanwhile, the Bank of Korea said its business sentiment index (BSI) fell this month, indicating that the government-sponsored discount events in October had little impact on the overall economy.

Bank of Korea data showed the BSI, a gauge for how businesses feel about economic conditions, dropped to 68 points in November, three points down from the previous month.

When the index hovers below 100, it signifies that a larger proportion of companies are feeling negative about the economy.

The index for conglomerates posted 72, while small businesses recorded 63 this month. Both retreated from a month earlier.

The BSI for December marked 69, foretelling a dire market atmosphere next month as well. The December figure dropped one point from earlier forecasts made in October.

In the Bank of Korea survey, about 24 percent of the companies cited sluggish domestic consumption as the biggest challenge for the current economy. About 20 percent said uncertainties in the economy are growing.