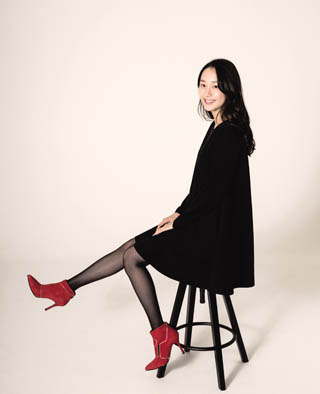 Newbie actress Lee Yoo-young has made huge strides since winning the best actress award at the Milan International Film Festival with her debut film, “Spring,” in 2014.

This year, the 26-year-old pulled off a femme fatal in the R-rated costume drama “The Treacherous,” then played a mysterious possessed girl in the recently released crime thriller “Fatal Intuition.”

After leaving a strong impression with both of her projects this year, Lee has become one of the most talked-about rising actresses at the moment.

During an interview with the JoongAng Ilbo, Lee, who naturally has light brown eyes, wore a big smile throughout, something we haven’t seen from her on screen.

Q. You played a possessed girl in “Fatal Intuition.” Did you feel any aftereffects?

A. Not at all. I didn’t know that a filming site could be such a comfortable and joyous place. For “The Treacherous,” I suffered a lot from the aftereffects. I think I was trying too hard to do well without the right level of self-confidence. But I just loved this film as soon as I read the screenplay.

What drew you so much?

My character, Si-eun, had many similarities with me, and as I played her, I gained more confidence as well. I am a bright person on the outside, but inside, I am just as fragile and soft-hearted as Si-eun.

Your character plays a vital role in elevating the tension of the film. Were you pressured in any way?

What I felt most pressured about was that this character needed to be portrayed in a realistic way. If the audience felt Si-eun was an out-of-place character, the movie would completely fail. The director and the producer also emphasized that my role was important.

How did you compromise on the character with director Yoon Joon-hyung?

At first, when I told director Yoon my own interpretation of Si-eun, he was so shocked because my reference was the madwoman in “A Petal” (1996). He told me that Si-eun is a timid and delicate character. I was looking forward to doing vomiting, trembling and using baby voices in the scenes where I was possessed, but I took most of that part out.

You went to the same school [Korea National University of Arts] as Park So-dam, another rising actress, who starred in “The Priests.” She played the part of a possessed girl character, too. How do you feel?

I read the script for “The Priests” before this film, and I wanted to play Park’s character, Young-shin, so badly. I didn’t care about shaving my head, so I reached out to director Jang Jae-hyun, but he said my appearance was too feminine to play that character. So-dam was also one of the candidates for “Fatal Intuition.”

Do your pale brown eyes affect your performance on screen?

My light eyes were difficult when I was young, but when I started acting, people often told me that my eyes were beautiful. So now I love them, too (laughs).

You were also reported to have recently worked with Korean auteur Hong Sang-soo. How was that experience?

I filmed it two months ago. My character, Min-jung, is a girl who is always smiling at other people. My on-screen partner is Kim Joo-hyuk. This film is my first time playing a bright character.

What did you do before you started acting?

I worked as a hairdresser. When I told my mom that I wanted to act, she told me to finish what I was doing, which was working as a part-timer at a hair salon. I acquired the license and got into an acting school right away.

I was a rebellious and free-spirited person, but things seem to be working out since I started acting. I am going to keep doing it to become a better person.