Where your inner child can come out and play

Where your inner child can come out and play 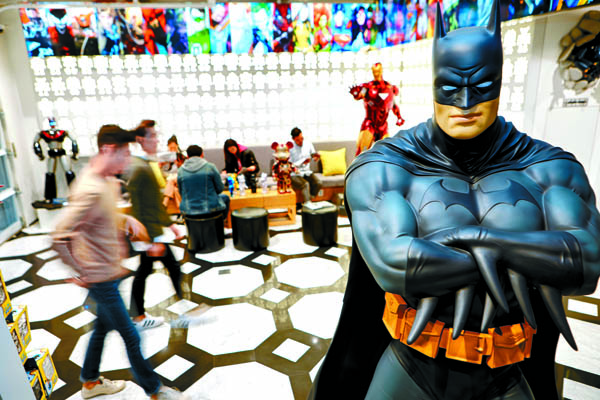 Adults can relive their childhood at Figure Museum W, located in Cheongdam-dong, southern Seoul, which displays up to 800 action figures. [PROJECT 100]

While there are not many available forms of entertainment for grown-ups other than pubs or karaoke, an increasing number of establishments are catering to those who want to indulge their inner child.

In such places, people in their 30s and 40s can spend hours playing with drones or game consoles that were popular back in the 1970s and ’80s.

“I forget all worries the moment I enter this place,” he said. “This is the best place for me to chill out because I sometimes find it hard to relieve stress by drinking alcohol or singing at karaoke.”

Kim Ji-hun, another office worker, finds pleasure at a big-box chain store located near his house. The 35-year-old used to spend his weekend at theme parks or zoos with his kids, but now he regularly visits Electro Mart, located inside E-Mart Town in Ilsan, Gyeonggi.

“I try to have me time by controlling robots,” he said. “I don’t need to care about salespeople because this place has a hands-on zone where I can spend up to three and four hours.”

The market for kidults - a compound of kids and adults - has been growing bigger and bigger and shows no sign of slowing down. According to Statistics Korea, the kidult market is estimated to be worth around 500 billion won ($432.7 million) as of this year, and is expanding by between 20 and 30 percent every year.

“A majority of Koreans are accustomed to group culture and they tend to hang out with others for entertainment, but some people have begun to put an emphasis on their own pleasure and personality and try to find things they really love to do,” Lee Jang-young, a professor of sociology at Kookmin University, explained.

Below are some of the popular playgrounds for kidults.

Berlin Ping Pong, located in Itaewon-dong, Yongsan District, central Seoul, is a cafe and pub. As its name suggests, the place has a large ping-pong table. 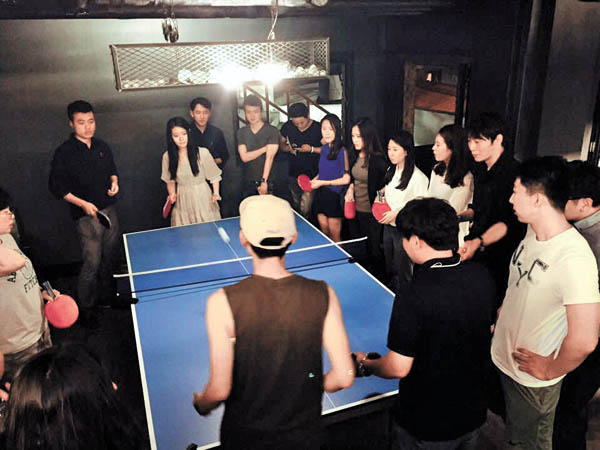 Unlike normal ping-pong, at this place up to 20 people play at once. Players surround the ping-pong table and take turns hitting the ball, and the last one standing at the end wins a free shot of alcohol.

People usually feel awkward at first but then they begin to talk and laugh as the ping-pong game progresses.

Seoul Ping Pong Pub, another bar in Itaewon-dong, also has a ping-pong table.

Having a ping pong table in the middle of the pub was the idea of Lee Tae-hun, one of the five co-owners of the place.

Lee, an art director for films like “Moss” (2010) and “Public Enemy” (2002), reportedly wanted to make a pub where people could have fun while drinking alcohol.

Another owner of the place is model-actor Do Sang-woo, whose works include the drama series “My Daughter, Geum Sa-wol” (2015).

On weekends, people form a line outside the pub to get a chance to play ping-pong there. There are various types of ping-pong games to play, but the most popular game here is the so-called beer pong.

Six cups of beer are placed at each end of the ping-pong table, and players attempt to throw the ball into their opponent’s cups.

Escape room games are all the rage these days in the Untied States, but people living in Seoul are also getting in on the action in Seogyo-dong, Mapo District, western Seoul.

“I had nothing to do other than having a meal and then talking and drinking coffee when I got together with friends, but this escape game is more fun and it makes me feel like I’m going back to my childhood,” said Ha Yun-jin, a 26-year-old customer who paid a visit to Mystery Room Escape.

Customers are able to select a room, each of which has its own theme. One of the rooms at this facility is titled “Murderer Victor’s Secret,” and other rooms have themes such as an ancient Chinese tomb and Egyptian pyramids.

Once the room is chosen, customers are taken to the room of their choice by staff members and then they begin to collect clues to solve puzzles or quizzes to escape the room. The time limit is set at 60 minutes, but it is rarely enough time to solve the mystery and escape the room.

All the props are realistic, adding more excitement and fun for the people participating in the game. At this venue, up to four people can collaborate in a single room.

The least-favorite weekend ritual for many married men is going grocery shopping at a hypermarket such as E-Mart, but Electro Mart, located on the basement floor of the E-Mart Town shopping complex in Ilsan, Gyeonggi, has made the shopping hub a magnet for men in their 30s and 40s.

Within its huge space, Electro Mart contains every imaginable toy for men of all ages from action figures to Gundam robots to drones and Legos.

“Unlike other branches of E-Mart, the main customers are men in their 30s,” said Choi Hun-hak of the E-Mart marketing team.

“They feel nostalgia while playing with the toys here,” he added.

Since the mart has hands-on sections, men can spend hours there while their wives go grocery shopping.

Of all the areas, the drone zone - where visitors can fly about 20 different types of drones - is the most popular.

A beer corner is located right next to the drone zone.

These days people can play games anytime, anywhere on their smartphones, but some people in their 30s and 40s like to go retro by playing games from the 1970s and ’80s at Retro Cafe Trader. 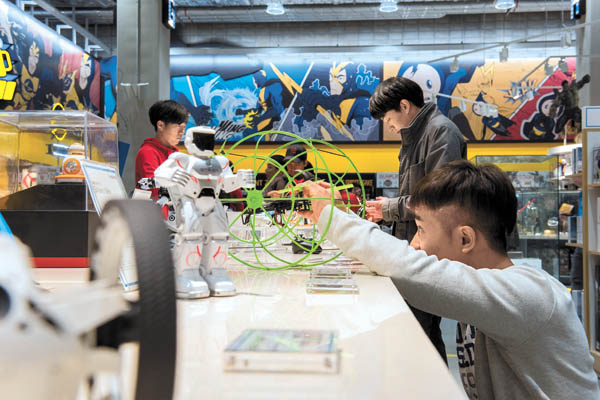 Men play with robots at the hands-on zone of Electro Mart, located inside E-Mart Town in Ilsan, Gyeonggi. The place is referred to as heaven for men in their 30s and 40s because it has every type of toy imaginable. [PROJECT 100]

Han Dae-yun, the owner of the cafe, began to collect old game consoles such as Famicom, Nitendo 64 and Neo Geo and decided to open a cafe. 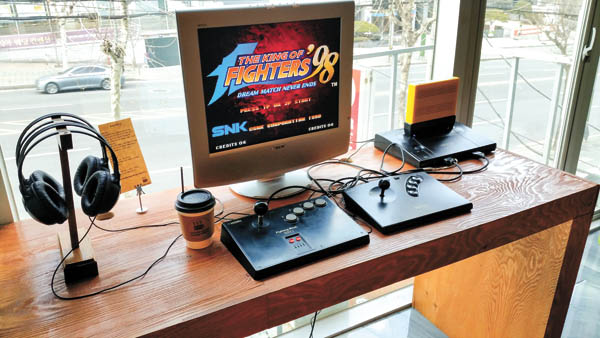 Retro Cafe Trader is a place where people can play with game consoles from the 1970s and ’80s. [PROJECT 100]

“Fathers bring their kids and they introduce the games to their children,” Han said. “It seems like fathers are having a lot more fun than their kids.”

One simply orders a drink or snack and can play unlimited games.

“One way to enjoy games to the full is bringing your friends and playing with them,” Han added.

Oraksil means a place for games. Every neighborhood used to have at least one or two oraksil, but they have disappeared with the advent of game consoles and computer games.

Games like Tetris, Bubble Bobble and Street Fighter are available.

Owner Seol Jae-woo grew up in Seochon, the west of Gyeongbok Palace, and frequently visited Yong Oraksil when he was young, but it shut down in 2011. Thus Seol decided to open a new oraksil on the site of Yong Oraksil.

Figure Museum W, located in Cheongdam-dong, southern Seoul, opened in March but has already become a heaven for action figure maniacs. The museum has about 800 action figures, including rare classics and limited editions.

For those who want to learn about action figures, the museum also chronicles major action figures, starting with Astro Boy, which was manufactured in 1951, and ending with Evangelion in 1995.

Life-sized superheroes including Spider-Man, Iron Man, Batman and Superman can also be spotted here and there inside the museum.