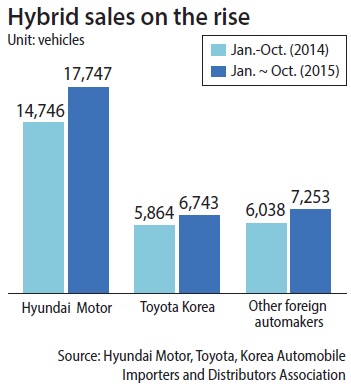 According to industry data on Sunday, Hyundai Motor had sold 17,747 of its hybrid models - the Sonata Hybrid, Sonata Plug-in Hybrid and Grandeur Hybrid - through October, which is an all-time high for the nation’s leading automaker and a 20.34 percent rise year on year.

But just before the Volkswagen scandal in September, sales of Hyundai hybrids had hit an all-time low of 1,234 units. That figure increased to 1,487 in October.

Sales at Toyota Korea, one of the two contenders in the local hybrid car market along with Hyundai, increased even more in terms of growth rate. Between January and October, the Japanese automaker sold 6,743 hybrids, a 23.3 percent rise from a year ago. The growth allowed Toyota Korea to take second place in hybrid sales from Kia Motors, selling about 1,600 more models than the Korean automaker.

In November, Toyota Korea sold 849 hybrids last month, which was its all-time monthly high for the automaker.

As Hyundai and Toyota rode high, overall hybrid sales in the country rose by 6.7 percent from year ago to hit 30,159 through October.

“The bad image of diesel cars created by Volkswagen will not fade away easily,” a spokesman of a local automaker said. “Since many Korean and foreign companies will roll out new hybrid cars successively, the market for the environmentally friendly cars will grow very quickly.”

Among local automakers, Kia Motors will start selling the new K5 Hybrid next month and Hyundai Motor will roll out a new model, currently being developed under the name “AE,” next year. The company says it will directly compete with Toyota’s ever-popular Prius model.