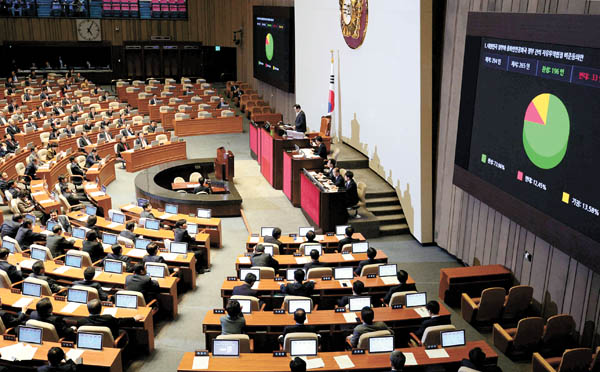 The National Assembly ratifies Monday the Korea-China Free Trade Agreement. Out of the 265 lawmakers who attended the vote, 196 supported it, 33 opposed it and 36 abstained. [NEWSIS]

The National Assembly approved Monday a long-stalled free trade agreement with China, Korea’s largest trading partner that has a market with a population of 1.3 billion.

The ruling and opposition parties passed the motion to ratify the Korea-China Free Trade Agreement (FTA), with 265 lawmakers participating. One hundred and ninety-six voted in favor of the FTA, with 33 against and 36 abstentions.

The pact was approved with a 1.6 trillion won ($1.38 billion) compensation package, which includes tax breaks and subsidies for the country’s farmers and fishermen for expected losses.

Once put into effect, the free trade deal will eliminate tariffs on $73 billion in Korea’s exports to China and $42 billion in its imports from China.

The Korea-China FTA, expected to eventually eliminate tariffs on about 90 percent of goods traded between the two countries, was finalized in November 2014. China and Korea officially signed the deal on June 1, and it will enter into force once the legislatures on both sides approve it.

Since giving her OK, President Park Geun-hye pressured the legislature to ratify the FTA with China as soon as possible, ideally before the end of this year, backed by the full support from the ruling Saenuri Party.

The main opposition New Politics Alliance for Democracy (NPAD), however, has demanded more extensive compensation for the farmers and fishermen, which has delayed the process for months. The two parties and the government began operating a trilateral conference in October to discuss compensation measures, though no progress was made until Monday.

The lawmakers and the government managed to produce a last-minute 10-point agreement Monday morning, just hours before the voting session. The agreement included a cooperation fund worth 1 trillion won meant to appease dissatisfied farmers and fishermen and larger subsidies.

Kim Jung-hoon, the Saenuri’s chief policymaker, and his NPAD counterpart Choi Jae-cheon negotiated the deal with Deputy Economic Prime Minister Choi Kyung-hwan and Trade Minister Yoon Sang-jick. The ruling party and the NPAD each held a general assembly of lawmakers Monday and decided to accept it.

The plan to create a cooperation fund of 1 trillion won centered on the idea that private companies, public enterprises and agricultural and fisheries cooperatives will voluntarily offer 100 billion won in annual contributions for the next 10 years to support farmers and fishermen.

The fund will be managed by the Corporate Partnership Foundation and the money will be spent on scholarships for children from farming and fishing villages, and medical, cultural and housing projects for those areas.

The lawmakers and the government also agreed to increase direct subsidies to make up for losses incurred by farmers and fishermen.

They will receive 95 percent of the drop in prices, up from the current 90 percent, under the compensation package.

The 1 trillion won fund was agreed upon in place of the NPAD’s proposal of a trade profit-sharing system, which said that the companies that benefited from the Korea-China FTA would offer some of their profits to farmers and fishermen.

The ruling party adamantly protested the idea but compromised Monday by accepting it under the plan for the cooperative fund.

“After the trade profit-sharing system was criticized as unconstitutional, lawmakers cheated by arguing that the companies were making contributions to the fund voluntarily,” said Kwon Tae-shin, the head of the Korea Economic Research Institute.

“A think tank said the Korea-China FTA will decrease agricultural production by 17 billion won, but the government is planning to inject 48 trillion won, three times more than that amount,” he said Monday morning. “If the government just pours in money to please them, it will damage public spirit.”

The fund, he added, though voluntary in name, is a new type of tax.

The Park administration has stressed the importance of putting the pact into effect before the end of this year in order to maximize the benefits.

The government has said Korea’s manufacturing industry alone is expected to see $1.35 billion export growth during the FTA’s first year and an annual average of $433 million trade growth over the next 20 years.

According to the government, the follow-up processes, including endorsements by the Cabinet and the president, will take at least 20 days. Normally, it takes an average of two months for an FTA to take effect after passage. The Korea-U.S. FTA, concluded in April 2007, was passed in November 2011, and came into force in March 2012.