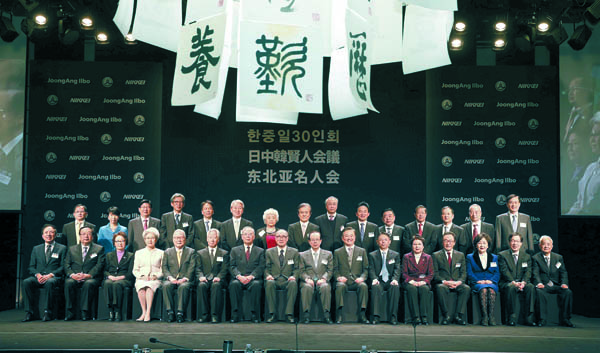 Participants in the Northeast Asia Trilateral Forum pose for a group photo on Monday at the Westin Chosun Hotel in central Seoul. The convention is co-hosted by the JoongAng Ilbo, China’s Xinhua News Agency and Japan’s Nikkei. [Kim Sang-seon]

Speakers at the 10th annual Northeast Asia Trilateral Forum on Monday emphasized cooperation among Korea, China and Japan, with the aim of enhancing peace and prosperity over the next 10 years.

The meeting, held in Seoul and co-hosted by the JoongAng Ilbo, China’s Xinhua News Agency and Japan’s Nikkei, welcomed representatives from the political, business and academic sectors from each nation.

Plans for culture-sharing and educational exchanges were also deliberated on to ensure solidarity and mutual growth in the coming decades. Forum participants agreed that cooperation and policy should also extend beyond Northeast Asia. Proposals made in the forum have generally been reflected in government policies.

Korean delegation head Lee Hong-koo, the country’s former prime minister and an adviser to the JoongAng Ilbo, said that the Trilateral Cooperation Secretariat (TCS), an international organization created in 2011 with the vision to promote peace and progress for Korea, China and Japan, should serve as the bastion for their work.

“If we can gather our wisdom, we can develop further,” Lee said in his keynote speech. “We have already agreed to solve issues like global warming and pollution together and have the solid awareness to transform our thoughts into action. We should utilize the TCS to establish task force teams to handle various issues like climate change and meet regularly.”

“[Our leaders] should meet frequently and build mutual trust,” he said. “There is no miracle fix to upgrade our relationship all at once.”

Zeng Peiyan, China’s former vice premier, emphasized economic cooperation from the perspective of the proposed China-Japan-South Korea Free Trade Agreement. “A unifying regional market is a trend in global development,” he said. “[Korea, China and Japan] are interdependent, so there is enough possibility for us to have a vital single market.”