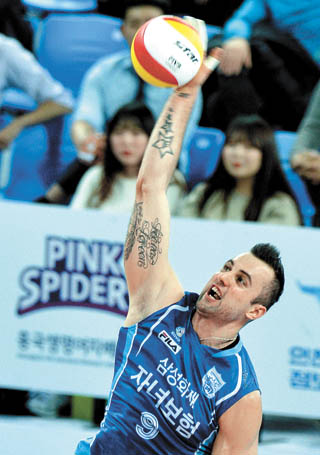 Samsung Fire Bluefangs’ Gyorgy Grozer makes a serve during the V-League game against Korean Air Jumbos at Gyeyang Arena in Incheon on Nov. 23. Grozer is currently leader in serve aces in the V-League. [NEWSIS]

He may not have had an impressive start with the Samsung Fire Bluefangs, but Gyorgy Grozer is now stepping up to lead the team.

This season, the Bluefangs are enjoying the talents of Grozer, the dominant foreign player.

Since coach Shin Chi-yong retired after leading the team for 20 years, the Bluefangs promoted their chief assistant coach Im Do-hun as their new skipper. The team struggled earlier in the season, but now the Bluefangs, who are looking for their ninth V-League title, have climbed to fourth place with six straight wins.

The recovery of the Bluefangs is mainly due to Grozer’s improved performance. The 31-year-old had a disappointing V-League debut. In the game against Hyundai Capital Skywalkers on Oct. 20, he had 17 points, but had only a 33.3 percent attacking success rate with 13 errors.

However, as Grozer adapts to the league, he is showing his strength.

Grozer, whose position is opposite (right side hitter), has so far scored more than anyone else in the 2015/16 season, collecting 380 points in 11 games. This is far ahead of Rush & Cash’s Robertlandy Simon who amassed 337 points in 13 games. Grozer also leads the league in open attacks with 49.45 percent of success rate.

Grozer’s main advantage is his powerful serve. As the season has passed one-third of the schedule, Grozer is currently averaging 0.88 serve aces per set, which beats Simon’s 0.48. Simon, the 28-year-old from Cuba, was the league’s best server last season at 0.57.

Taking a spike from 3.75-meters and reaching a maximum speed of up to 131 kilometers per hour, Bluefangs coach Im, who is renowned power spiker in 1990s, is impressed by Grozer’s serve.

“First of all, his serve form is very clean and has a high hitting point,” said Im. “He’s got the accuracy of hitting point and spikes the ball with a good wrist snap.”

Grozer, who has previously played in Russia, Poland, Germany, Italy and Hungary, said he tries to keep his arms straight to make powerful serves. There is also a certain area on the court that he likes to aim his serves.

“When I was with German club [VfB Friedrichshafen], I was told that it’s effective to make the serve to the center” Grozer said. “My favorite shot is to make the serve between the middle back and the right back position. I also mainly go for long serves, rather than short ones.”

Grozer also has his own training routines. He only practices serves in the afternoon, while in the morning he practices other moves, such as serve receives, that don’t require big jumps.

“I weigh about 106 kilograms, so running every morning [helps] my body,” he said. “For the last five years, I have tried not to jump, but has been taking other training programs.”

Analysts said this season’s serve title will come down to Grozer and Simon, though these two foreigners have tight races in other attacking categories as well.

They have already shared MVP for each round-robin series, with Simon getting the first round, while Grozer took the top honor for the second round last week.

In their two previous encounters, Grozer has shown a better performance than Simon.

In their first meeting on Nov. 18, Grozer smashed 48 points including nine serve aces to lead his team’s 3-1 victory, while Simon had 37 points with two serve aces.

In their second meeting on Sunday, both foreigners had seven serve aces. During the second set, Simon made four consecutive serve aces to become the third player in the V-League history to achieve the feat, but it was Grozer again who was smiling at the end.

While leading the Bluefangs’ 3-2 victory, Grozer had 40 points, two more than Simon. As well, the 2-meter spiker had his second “triple crown” of the season - scoring three or more points in back attack, serve aces and blocks - by scoring with 12 back row attacks, seven serve aces and three blocks.

But Simon, who already achieved two triple crowns this season, was just one point shy in blocks to get his third triple crown of the season.

Though Grozer currently leads the V-League in serves, he isn’t without flaws. The 2012 Polish league MVP has so far made 61 service errors in 41 sets, which is second behind Gundars Celitans of Woori Card Hansae, who committed 66 serve errors in 51 sets.

“If he tries to relax the power a little then he can reduce mistakes,” coach Im said.

Grozer said when he struggles to make a serve, he asks assistant coach Shin Jin-sik for advice, which seems to be working.

“Coach told me to raise my arm higher when taking a spike,” he said. “In order to make good serves, I study and think a lot about techniques.”