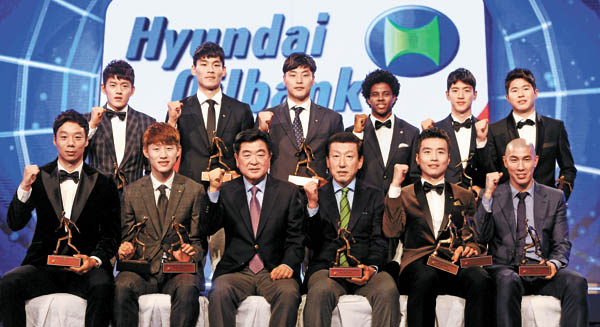 Team captain and striker Lee Dong-gook won the MVP title, while midfielder Lee Jae-sung was named Young Player of the Year and Choi Kang-hee claimed the Coach of Year award.

This is the first time since 1987 that a single team has swept all three award categories.

At the award ceremony held in Hongeun-dong in northern Seoul, Dong-gook earned 52 votes among 109 votes cast by football reporters, to win the MVP, beating Yeom Ki-hun of Suwon Samsung Bluewings, who had 48 votes, and Kim Shin-wook of Ulsan Hyundai who picked up nine votes. 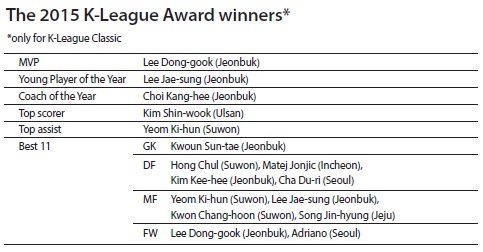 The 36-year-old striker is already the player with the most K-League MVP titles. He is also the first player in league history to win back-to-back MVP titles.

“If I wasn’t playing for Jeonbuk, I would not have won this much,” said Lee. “I don’t know who will break this record in the future, but I think this is a great record that will remain for some time.”

Lee, who is the all-time leading scorer in the K-League, had 13 goals and five assists in 33 matches, finishing as the fourth top scorer this season. Lee, a father of five children, appeared in the entertainment shows with his children during the season. He said he tried to work harder to avoid criticism that his off-field activities affected the team’s performance.

“If you only look at the stats, I think it’s right to give the award to Kim Shin-wook or Yeom Ki-hun,” Lee said. “But our players won the title and I think this award is given to me as a representative of Jeonbuk players.”

Yeom had league top 17 assists in 35 matches in addition to his eight goals. The former Jeonbuk and Ulsan player became the league’s all-time leader in assists on Oct. 4 when he surpassed Korea U-23 football team coach Shin Tae-yong’s 68 career assists. Yeom now has 73 assists in 239 matches.

Kim Shin-wook was looking for his second MVP title since 2013. The 1.96-meter striker was the league’s top scorer this season after notching 18 goals in 38 matches and became the first local player to win the “Golden Boot” since 2010. However, his club Ulsan finished seventh in the league.

“I was a fan of Lee Dong-gook whom I watched on television. I’m just honored to be a candidate with him,” Kim said.

Lee, the 1998 Rookie of the Year winner with Pohang Steelers, is in the last year of his contract with Jeonbuk. During the press conference, the striker showed concern over his contract renewal, but coach Choi revealed he wants Lee to stay with the team.

“I have told our team management to renew his contract before the first half, but it wasn’t made,” Choi said. “There will be good news in the near future.”

“I’m happy to receive this award which I would not be able to win if not for my teammates,” Lee said. “People say it’s difficult for a rookie player to survive in a club like Jeonbuk, but I’m happy that I was able to make it by winning this award.”

The K-League adopted the Young Player of the Year award in 2013. It is given to players aged 23 or under, have less than three seasons of professional experience and have played at least half of this season’s matches.

This year was the last chance for all three candidates to claim the award. Kwon and Hwang are in their third season after making their pro debuts in 2013, while Lee was born in 1992.

All three players also had impressive performance for the national football team.

Lee scored six goals and five assists in 33 matches, but beyond his stats, he has been considered the engine of Jeonbuk’s midfield.

“All three players deserve to win the award, but I think Lee Jae-sung made the biggest progress this season,” said national football team coach Uli Stilike. “He has developed his ability. He can finish and completes in the critical moments.”

The Coach of the Year award was predictable as it fell to Choi Kang-hee who led Jeonbuk to their successful title defense.

Choi became the coach with most K-League titles after this season’s victory. The 56-year-old previously won the title with Jeonbuk in 2009, 2011 and 2014.

“Coming into this award ceremony, I was nervous not because of me winning the award, but whether our players can win MVP and Young Player of the Year,” he said. “What I’m really happy for this season is that our team became top team in attendance even when we were far away from the Seoul Metropolitan area.”

Choi added that his goal for next season will be to win the AFC Champions League, which his team hasn’t won since 2006.

For the seasonal Best 11, which picks best players by position, Jeonbuk’s Kwoun Sun-tae was selected as the best goalkeeper in 2015. Kwoun allowed 35 goals in 36 matches in his team’s title defense.

For the back four, FC Seoul right back Cha Du-ri was selected in his final season as a player, after announcing his retirement earlier this year. Suwon’s left back Hong Chul, Jeonbuk’s center back Kim Kee-hee and Incheon United’s Croatian defender Matej Jonjic were named.

Jeonbuk’s Lee Dong-gook and Seoul’s Brazilian striker Adriano were selected as best forwards of the season, but the league’s top scorer, Kim Shin-wook was left out. While Lee was easily chosen to take one of the two spots after garnering 65 votes among 218, Kim was just one vote shy to Adriano who earned 53 votes.

Cho’s Suwon FC is currently facing a promotion-demotion playoff with Busan I’Park which finished 11th in the K-League Classic.

The winner of home-and-away playoff stays or goes up to the K-League Classic. The first match is held on Wednesday in Suwon, while the second leg is scheduled on Saturday in Busan.