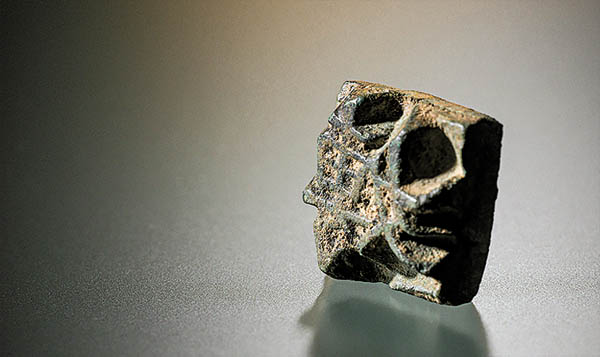 Archaeologists from South and North Korea found what could be movable metal type from the Goryeo Dynasty (918-1392). There are only two pieces of extant Goryeo-era movable type in both South and North Korea, despite historical records showing that the technology was widely used in Korea in the 13th century. No scientific tests have yet been conducted on the newly discovered piece of type. [INTER-KOREAN HISTORIAN ASSOCIATION]

South and North Korean archaeologists discovered what may be movable metal type made before 1361 at the site of a royal palace from the Goryeo Dynasty (918-1392) in what is today Kaesong, North Korea.

It would be the third example of Goryeo-era metal type found in the Korean Peninsula.

Although there are historical records that movable type was being used in Korea beginning in the early 1200s, there are only two pieces of Goryeo-era movable type in South and North Korea - one in Pyongyang’s Chosun Central Historical Museum and the other in the Seoul’s National Museum of Korea. 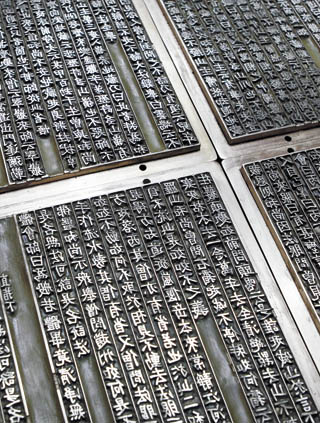 While the movable metal type used to print “Jikji Simche Yojeol” no longer exist, a local government in Korea has recreated the type to show what it would have looked like. [JOONGANG ILBO]

And while there is one surviving volume of “Jikji Simche Yojeol,” a book containing the essentials of Zen Buddhism printed in Korea in 1377 and the oldest extant book printed using movable metal type, the type used to print the book has not been found.

Announcing on Monday the results of the six-month archaeological exploration at the site of the royal palace in Kaesong - known as Manwoldae - the Inter-Korean Historian Association said it found the movable type on Nov. 14.

“Based on reviews by experts, we believe the movable type is indeed from the Goryeo period,” Choe Kwang-shik, the head of the association, told reporters. “And given that Manwoldae was destroyed in 1361, we think chances are high that the piece is from before that year.”

Based on this, Korean scholars believe that the movable type found at Manwoldae was most likely part of a project led by the royal court of the Goryeo Dynasty. The printing of “Jikji Simche Yojeol,” on the other hand, was led by the Buddhist leadership.

The association also emphasized that the piece of type is the only one that was found during an excavation. 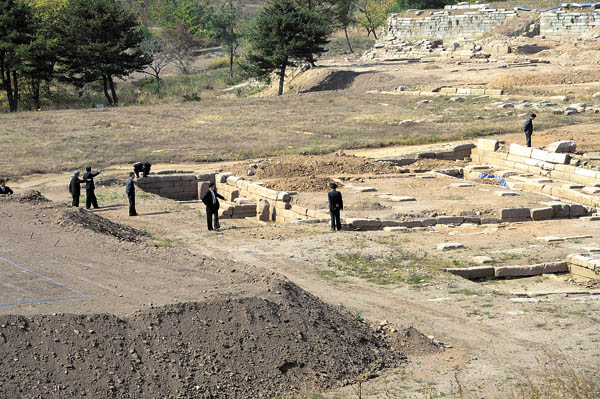 The newly discovered piece of type is among some 3,500 artifacts found at Manwoldae, where the two Koreas have been conducting a joint excavation since 2007. [JOONGANG ILBO]

The one in Pyongyang was found rather accidentally by the North in 1956 while restoring Manwoldae, which was damaged during the 1950-53 Korean War. The one in Seoul is believed to have been owned by the last descendants of the Joseon Dynasty (1392-1910), who bought it from a Japanese antique dealer.

However, since there has not yet been any scientific analysis of the piece of type, some say it’s too early to conclude it’s from the Goryeo Dynasty. Officials from the Inter-Korean Historian Association said they plan to conduct various tests in the coming days in cooperation with the North. But critics say it may be a long process since the artifact is in the North, and cultural collaboration is rare amid the present political tensions.

The type is among some 3,500 relics found at Manwoldae during the latest round of excavation held from June 1 to Nov. 30. The joint excavation began in 2007 and is being led by the South’s Inter-Korean Historian Association and the North’s People’s Reconciliation Council. There have so far been seven rounds of excavations. The latest one lasted the longest, at six months, while the previous rounds usually went on for two months.