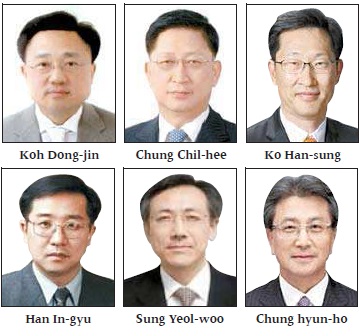 Samsung promoted six vice presidents to president roles and changed the titles and responsibilities of nine existing executives in an annual top management reshuffle across its subsidiaries on Tuesday.

The promotions took place mostly at key subsidiaries - Samsung Electronics and Samsung C&T - as the No. 1 conglomerate, which is currently facing stagnating growth, searches for next-generation businesses that will help it maintain its leadership.

Most notably, the group promoted Koh Dong-jin, executive vice president at Samsung Electronics in charge of mobile research and development, to president of the mobile communications business at the company, becoming the acting commander-in-chief of Samsung’s lucrative yet increasingly sluggish smartphone business.

The rather obscure figure has led the development of Samsung’s latest flagship Galaxy smartphones - S6 and Note 5 - since late 2014.

The new president of the mobile communications business will strengthen its competitiveness using his experience in hardware and software as well as in developing solutions and services such as Samsung Pay and KNOX, Samsung said.

Shin, the iconic presenter of Samsung’s Galaxy phones on global stages such as Mobile Unpacked events since 2011, will maintain his post but will “focus on the long-term business strategies and new growth drivers based on his long-time experience” after spinning off part of his responsibilities. Some speculated he would be laid off because of the worse-than-expected sales of Galaxy phones in recent years.

Yoon Boo-keun, president and CEO of Samsung Electronics’ consumer electronics division, will also remain but will say goodbye to the title of head of the digital appliances business under the division. Like Shin, he will instead concentrate on fostering new growth areas. Samsung has yet to decide who will succeed as head of the digital appliances business.

“By promoting the figure who spearheaded the development of our key products, we have reinforced the importance of technology-centered management,” a Samsung spokesman said. “The essence of the overhaul this year lies in picking those who are deemed capable of making changes and achieving growth.”

The reshuffle comes 19 months after Samsung Chairman Lee Kun-hee was hospitalized following a heart attack. The announcement on Tuesday also marks the second year since Samsung Electronics Vice Chairman Jay Y. Lee, the only son and heir apparent of the 73-year-old bedridden chairman, implicitly took over the leadership.

Last year, the group minimized promotions - only three took place at the president level - as the vice chairman opted for stability rather than a major overhaul after his father’s illness created a management vacuum.

Samsung is in a dilemma over an official leadership replacement, given that Chairman Lee’s condition remains uncertain. He inherited the chairman’s post when his father and Samsung founder Lee Byung-chull passed away in 1987.

Given the awkward situation, none of the three children of Chairman Lee, who are all involved in Samsung businesses, were promoted this time.

Only the second daughter, Lee Seo-hyun, who had been assuming double titles as president of management planning at Samsung C&T and head of management strategy at advertising subsidiary Cheil Worldwide, had her role changed to president of the fashion division at Samsung C&T. She is now expected to be solely devoted to the fashion business at the de facto holding company of Samsung Group.

Meanwhile, Jun Dong-soo, president and CEO of Samsung SDS, was named president of the health and medical equipment business at Samsung Electronics. Samsung Electronics has chosen medical devices as one of its next-generation growth drivers. Jun, an expert in digital audio/video and memory chips, is widely recognized as a “problem solver.”

Hong Won-pyo, president and head of the global marketing office at Samsung Electronics, was transferred to Samsung SDS as president of the solutions business.