Kepco powers up Jordan and the Philippines

Kepco powers up Jordan and the Philippines

Kepco has two thermal power plants in Jordan: one in Al Qatrana and the other, known as IPP3, in a suburb of Amman.

These were the company’s very first projects in the Middle East.

The Jordanian energy authority sustains the rest of the power supply via electromagnetic, wind and biogas power sources.

Kepco decided to use natural gas, the most stable and affordable source of power, because Jordan lacks the natural geological conditions to produce petroleum, unlike many other Middle East countries.

In fact, Jordan is a resource-scarce country, just like Korea. Most of the nation’s wealth comes from the tourism industry, thanks to its natural and historical attractions like Petra and the Dead Sea.

The country imports natural gas from its ally Egypt, from which power can be generated for a fifth of the price of diesel or crude.

But since the country is threatened with seeing its gas pipelines disconnected due to a bombing or other attack, the Al Qatrana plant has an oil tank filled with up to 30,000 tons of crude or diesel as backup. This allows the plant to operate 10 full days without access to natural gas.

“The main source is natural gas, but we can use crude or diesel anytime in case a gas pipeline disconnects. A mixed-source power plant like this is the most suitable type of electricity generation in countries like Jordan,” said Kim Pil-seon, head of Amman Asia Electric Power Corporation, the operator of the IPP3 plant.

He explained that the Al Qatrana plant also includes a turbine wind-cooling facility, which is a unique feature. Most countries utilize water-cooling facilities that take advantage of oceans or other natural resources, but Jordan is naturally water-scarce.

Although the nation shares a border with war-torn countries like Iraq and Syria, Kepco’s Al Qatrana office was not worried about the sustainability of its profits, because its contract with the Jordanian government guarantees a certain level of revenue despite actual electricity consumption. The Jordanian government is also responsible for supplying energy sources from Egypt. All Kepco had to do was bring in Lotte E&C and other Korean builders to construct the plant, then set up the affiliate Kospo as its operator.

Before Kepco began commercial operation of its gas-powered plants in 2011, blackouts were relatively common, particularly as demand for power has skyrocketed due to the eight million refugees that have poured in from Iraq and Syria.

“During my 20 years in Jordan ... I was often stressed because I had to be constantly ready for blackouts, which occur at least a few times a year, always saving my electronic documents and emails,” Lee Ji-young, a Korean business owner residing in Amman, said. “But in the past few years, I don’t worry about blackouts anymore, even while the country has recently seen its population explode due to millions of refugees.” 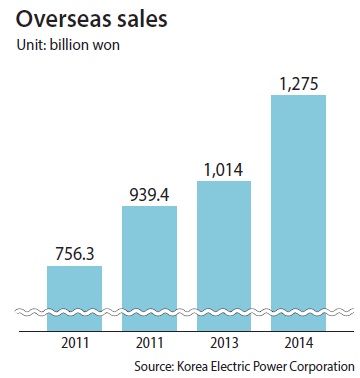 Following the success of the Al Qatrana project, the company obtained additional projects in Jordan and from nearby countries like the United Arab Emirates and Saudi Arabia, while also reviewing a wind power project in Jordan to take advantage of the country’s abundant wind resources.

Kepco is also expanding its business in the Philippines, this time with coal thermal power plants. The Southeast Asian country was the very first place Kepco headed to do business overseas, in the mid-1990s.

In the Philippines, Kepco decided to take a different approach than in Jordan, staying directly involved in all business processes, ranging from purchasing coal and generating power to finding buyers and marketing.

“Because we are in charge of the entire business process, we may be taking some additional risk,” said Cho Chang-yong, president of Kepco SPC Power Corporation, a joint venture opened with local power company Salcon Power Corporation, which is based in Cebu. “But at the same time, this leaves us with plenty of revenue, at least 15 percent of which is profit.”

Kepco SPC is the country’s fourth-largest independent power generator, while the top three are all local companies. The Philippines has a privatized electricity market, making it more difficult for foreign players to compete.

However, Kepco has steadily amassed a market share of around 30 percent in Cebu, which translates into 8 percent of the nation’s total electricity, with its clean generation technologies and reasonable prices compared to other foreign competitors from places like the United States.

The company has participated in an open bid to acquire another coal-powered power plant, the Naga Power Complex, which is currently owned by partner Salcon Power, as part of efforts to keep expanding its business in the Philippines.

“The Philippines has a huge generation capacity - 17,800 megawatts - but most of the facilities are old and don’t actually work,” said Lee Sang-kook, vice president and plant manager of Kepco SPC Power Corporation’s Cebu Power Plant. “So, we see much larger business possibilities in the country.”

Despite the global trend of reducing thermal power generated from coal or gas, Kepco said realistically, it must push coal and gas to provide wider access to electricity for people and businesses in developing countries.

“Easy and stable access, as well as affordability, are the most significant factors when beginning a power generation business and picking the energy source, which makes us consider the economic status of the country,” Lee of the Cebu Power Plant said, stressing that too quick a transition to unconventional energy sources may lead to stiffer power bills for consumers.

Lee, however, emphasized that “Kepco aims to do our best to generate power in the most eco-friendly manner by implementing the most up-to-date technologies that reduce emissions of possible polluting substances.”

Kepco also hopes its businesses help shave down the excessively high electricity prices in the country.

“The gross domestic product of the Philippines was about $300 billion [last year], but the average power bill is [disproportionately] expensive ... which makes it difficult for many to use home appliances like refrigerators or air conditioners,” Lee added. “Many households are still living with just one lightbulb, often suffering blackouts.”

Kepco first jumped into the overseas power business in 1995, obtaining the rights to operate the Malaya Thermal Power Plant in Rizal, Philippines.

The company has gone on to operate some 21 projects in thermal, renewable and nuclear power generation, as well as power transmission, in 14 countries including China and Mexico as of September.

The company hopes to gain 20 percent of its annual sales from overseas branches by 2020.