Mercedes-Benz unveils its SUVs for next year

Mercedes-Benz unveils its SUVs for next year 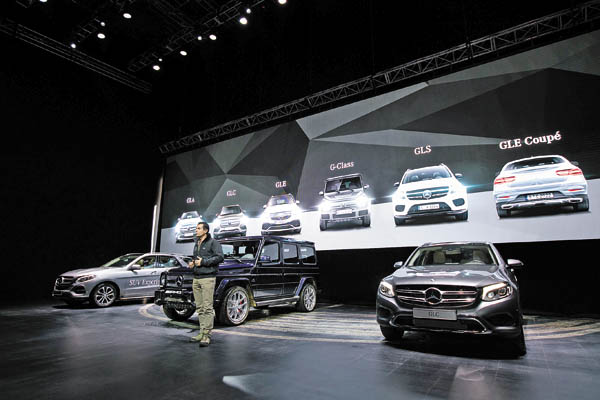 Mercedes-Benz Korea CEO Dimitris Psillakis introduces the automaker’s SUV lineup for next year during a press briefing held at the Muju Resort in North Jeolla on Tuesday. [MERCEDES-BENZ KOREA]

MUJU COUNTY, North Jeolla - Mercedes-Benz has announced next year’s SUV lineup for the local market, where the popularity of SUVs is growing every year.

At a media event held at the Muju Resort in North Jeolla, Mercedes-Benz Korea CEO Dimitris Psillakis started the day by driving the automaker’s G63 AMG SUV through an outdoor obstacle course - including some roads covered in snow - to demonstrate its performance prior to the opening remarks.

“This year was one of the most successful years for Mercedes-Benz Korea,” the CEO said. “Through October, our sales in Korea upped by 28.2 percent from a year ago, and SUVs accounted for 7 percent of our total sales. We expect them to be doubled by the end of next year.”

The company said Korean consumers will meet six Benz SUV models next year, including the GLE, GLC, GLA, GLS and GLE Coupe. The new GLE and GLC SUVs will be rolled out in January, and the GLS and GLE Coupe will hit the market in the second half of next year. The automaker said it will continue expanding its SUV lineup in the future.

The company also gave a sneak peek at the new GLE SUV, previously known as the M-Class, and the new GLC, the successor to the GLK SUV.

The new GLE is an upgrade of the M-Class, which has accumulated global sales of 1.6 million units.

Unveiled for the first time at the New York International Auto Show in April, the new GLE is expected to compete with other premium SUVs in the country, such as the BMW X5, Porsche Cayenne and Range Rover, in the premium full-size SUV market.

Lately, the premium SUV market has been led by foreign brands.

Competition in the luxury SUV market is only getting tougher.

The new Range Rover Sports SVR will hit Korea soon, and other popular brands like BMW and Lexus are also preparing new SUVs.

American automaker Ford has also jumped into the fray by releasing its Explorer SUV and the new Lincoln MKX.

Benz’s luxury GLE SUV will be offered in both diesel and gasoline models. The diesel model consists of two trims, most notably the 250d 4MATIC, in which a full-time all-wheel drive system is applied to a nine-speed 9G-TRONIC transmission.

Among the gasoline models, the most anticipated is the high-performance Mercedes-AMG GLE 63 4MATIC, which is includes an AMG engine and an AMG SPEEDSHIFT multi-clutch seven-speed sport transmission. The luxury SUV will meet Korean consumers in January.

The automaker also previewed its GLC SUV, which debuted in Germany in June. The GLC is the full-change model of the GLK. The company said it will be offered in two trims: the GLC 220d 4MATIC and 220d 4MATIC Premium.

Both are diesel-based cars. The GLK will also be rolled out next month. The price for the GLE has not yet been announced, while the starting price for the GLC is 64.7 million won ($56,000).