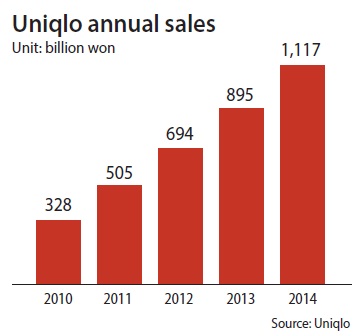 The fashion unit raked in 1.12 trillion won in sales in the country during its fiscal year from Sept. 1, 2014, to Aug. 31, 2015, based on a local regulatory filing released on Monday, a 24.7 percent increase from the previous fiscal year.

Korea is the third largest in terms of company sales after Japan and China. Uniqlo cited Korea and China for driving “a large portion of the segment’s growth after reporting strong gains in both revenue and profit” in its yearly fiscal report.

Asia’s largest apparel chain has done a brisk trade in Korea thanks to its performance-enhanced products and affordable prices since its opening in 2005.

While the primary consumer base of competitors Zara and H&M is largely confined to trend-conscious youngsters, Uniqlo has a wider appeal to general consumers in Korea regardless of age and tastes due to basic design.

The success of the fashion brand led to the creation of local brands with similar concepts, such as 8Seconds, SPAO and Top Ten. Still, sales of the three brands fall into the 100 billion won range.

While domestic sales of the brand rose 12.1 percent year on year in 2014, international sales advanced 48.9 percent, backed by sales growth in Asian markets. However, Uniqlo stores in Australia and the United States lost money, according to the company’s filing.

The fashion retailer will continue to expand next year as it plans to open approximately 175 new stores across global operations.

Uniqlo operates in 17 countries with more than 1,000 stores.