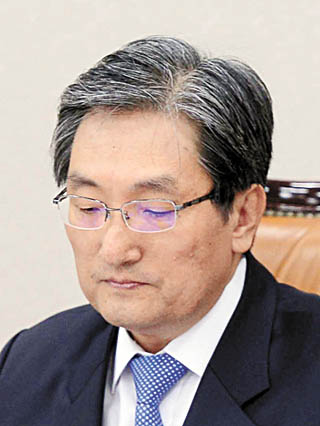 An opposition party member is the subject of growing criticism for selling his book, a collection of poems, by setting up a portable credit card terminal at his National Assembly office in violation of the law.

Criticism of Rep. Noh Young-min, a three-term lawmaker of the New Politics Alliance for Democracy (NPAD), intensified after it was also revealed that state-run institutions subject to oversight by a parliamentary committee that Noh belongs to made purchases of his book amounting to 2.5 million won ($2,160).

The backlash has grown against Noh, who represents a district in Cheongju, North Chungcheong, because of the long-held practice of lawmakers selling their books through promotional events as a disguised way to raise campaign funds.

Because of negative public sentiment, the ruling Saenuri Party banned its lawmakers from holding such book promotion events, which used to attract people looking to buy influence with lawmakers. Those seeking influence make lavish donations in the name of book purchases by handing over envelopes full of cash bearing their names.

In short, holding such events have been seen as a convenient source of revenue for many lawmakers.

Trouble for the opposition lawmaker began on Tuesday as the JoongAng Ilbo reported that Noh had installed a credit card terminal at his office to sell his book, titled “Only One Flower Under the Sky.”

The Korea Coal Corporation and the Korea Resources Corporation made purchases worth 500,000 won and 2 million won, respectively, using that card terminal. Such purchases are in violation of a law prohibiting credit card terminals at non-business locations.

An aide to Rep. Noh told the JoongAng Ilbo that the card terminal was owned by a publisher, and Noh decided to use it temporarily at his office because there were people who wished to buy his book after his book promotion event on Oct. 30 in Cheongju.

Noh’s office also said it had refunded the purchases by state-run institutions to avoid trouble.

The explanation, however, fell short of easing the controversy. The fact that state institutions overseen by the Trade, Industry and Energy Committee, on which Noh sits, bought his book reinforced the perception that they were likely pressured to make the purchase.

Under election laws, lawmakers are banned from holding book promotion events within 90 days before an election.

And a bill has been submitted that would make it illegal for lawmakers to host book promotion events any time.

The latest scandal involving Noh adds to the troubles of the opposition NPAD, which was already in hot water after the revelation that one of its lawmakers, Shin Ki-nam, met with the dean of the law school that his son attends after his son had failed to pass a graduation exam.

The report on his meeting with the dean immediately sparked suspicion that he was trying to pressure the dean to revise the rules so that his son could graduate in time.