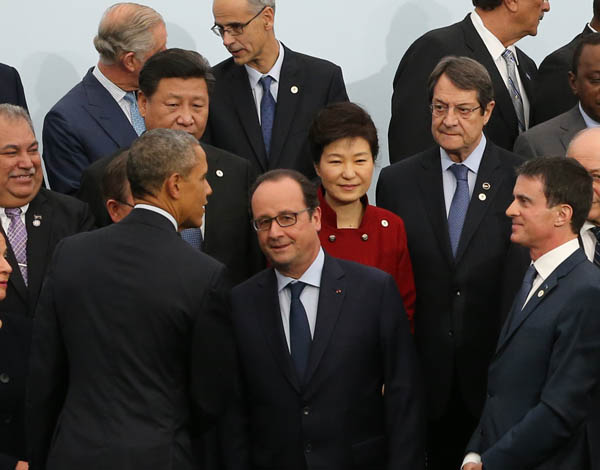 In her address during the Leaders Event at the United Nations Climate Change Conference in Paris, the president urged the world leaders to concentrate their efforts on launching a new management system to combat climate change.

“Carbon dioxide concentrations in the atmosphere reached the highest amount ever last year,” Park said. “We have no more time to hesitate.”

She went on to reaffirm Korea’s plan to fight climate change, explaining that the government would work toward fostering a market for new energy industries, worth 100 trillion won ($86.88 billion), by 2030 and creating 500,000 jobs through those programs.

Park further vowed that Korea would meet its Intended Nationally Determined Contribution submitted to the UN Framework Convention on Climate Change in June 2015. Despite the country’s heavy dependence on manufacturing, Korea put forward a target to reduce its greenhouse gas emissions by 37 percent below business-as-usual emissions, equivalent to 850.6 million tons of carbon dioxide by 2030.

Korea aims to take the lead in reducing greenhouse gas emissions, Park said, stressing that a new market would be one in which anyone can produce and sell electricity produced through renewable energy facilities, power storages and electronic cars.

The country will also require all buildings and major factories to improve their energy efficiencies.

“Jeju Island will eventually be supplied 100 percent with electronic cars and renewable energy,” Park said. “It will be transformed into a carbon-free island.”

About 150 world leaders including U.S. President Barack Obama, Chinese President Xi Jinping and Japanese Prime Minister Shinzo Abe attended the conference. Two sessions were operated at the climate summit, and Park gave her speech during the first session as the 10th speaker.

On the sidelines of the conference, Park met with Russian President Vladimir Putin and discussed North Korea’s nuclear crisis. The Blue House said the two leaders also discussed the possibility of a trilateral economic project involving the two Koreas and Russia.

On Tuesday, Park visited the Unesco headquarters in Paris, where she was scheduled to meet with Director-General of Unesco Irina Bokova and address French dignitaries, the Paris diplomatic corps and Unesco officials. The Blue House said she will highlight Korea’s 70-year history with the organization and present a plan to expand ties.

Korea provides 7.5 billion won to the organization, making it the 13th-largest donor.

Park is scheduled to depart for Prague later in the day where she will attend a meeting with the Visegrad Group summit to bolster Korea’s ties with central Europe. The group is composed of the Czech Republic, Hungary, Poland and Slovakia.