Returning home with the resolve to change politics

Returning home with the resolve to change politics

Kim Jong-pil, center, and his wife, Park Young-ok, left, are greeted by his supporters and relatives at Gimpo International Airport on Feb. 25, 1986, upon his return to the country. [KIM JONG-PIL]

In April 1983, I flew to the United States at the invitation of Columbia University. For two months, I served as a visiting scholar in the department of East Asian studies and gave a lecture every Wednesday on the history of modernization in the region.

I tried to teach based on my own experience in transforming an impoverished state through rapid modernization. Starting in mid-June of the same year, I also began meeting with Korean immigrants in major cities and U.S. political figures. One of the meetings that I can vividly remember to this day was that with Benigno Aquino Jr., a democracy activist and longtime political opponent of Filipino dictator Ferdinand Marcos.

I had come to know him after he visited Korea years prior. Aquino was once sentenced to death under Marcos’s autocratic government, but was later commuted and he was released from prison in May 1980, after which he went into exile in the United States. In early August 1983, Aquino and I were invited by Harvard University to give special lectures on East Asian history. Afterward, we had dinner together, during which he told me about his plans to return home to resume his political activities and fight against the Marcos’s dictatorship. 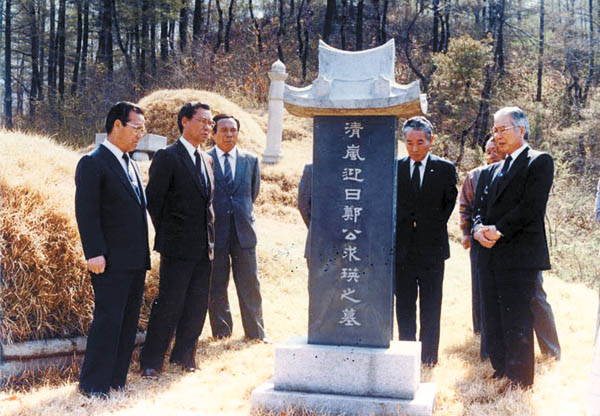 Kim Jong-pil, far left, pays his respects on April 15, 1986, at the grave of Jung Gu-yeong, the first chairman of the Democratic Republican Party (DRP), in North Chungcheong. [KIM JONG-PIL]

“I’ve decided to go home to continue my struggle for democracy,” he said.

His plan was to begin his political activities in time for the 1984 presidential election. Marcos’s wife, he continued, had secretly visited him in New York and relayed her husband’s message that he would be free from political persecution if he returned.

Marcos even wanted him to run as his rival in the election.

Sensing something was going wrong, I tried to persuade him to change his mind.

“Aquino, you can’t trust words from dictators whose only goal is to accumulate more wealth. History has been riddled with men in power who are only interested in wealth and are adept at deception. I have a bad feeling about this offer.”

Aquino closed his eyes for a moment to consider what I had just said.

“I won’t regret my decision, even if I were to die. I’m going home.”

I knew then that there was nothing I could do to stop him. He was willing to put his life on the line to stay true to his convictions.

On Aug. 21, 1983, I was in Hokkaido, Japan, at the invitation of Japanese lawmakers. It was a scorching day so, still dressed in my pajamas, I took a walk outside the hotel. On the street, I saw Aquino on the television inside a store window. I walked in to watch.

He had just arrived at Manila International Airport and was descending the stairs from the plane. Then I saw a soldier in uniform standing behind him. The soldier suddenly withdrew his pistol and shot him. Fatally struck, Aquino fell over.

The entire incident was broadcast live to the whole world.

I couldn’t believe what I had just seen. I had tried to convince him that he shouldn’t go and then this horrible thing unfolded. I couldn’t help myself but cry right there on the street; I wandered around the area for a while, feeling helpless.

The Filipino government later announced that the assassination had been carried out by a hit man employed by an unknown person. But no one believed a word of it.

Aquino’s death sparked a wide-scale democracy movement in the Philippines, and two years later his widow, Corazon Aquino, overthrew the Marcos regime and was democratically elected president. So while his death was tragic, it was not in vain.

I returned to Korea in October 1983, when the opposition movement against the Chun Doo Hwan military government was once again gaining steam.

Kim Young-sam, the former chairman of the opposition party, formed the Council for the Promotion of Democracy (CPD) with the supporters of Kim Dae-jung, another of Chun’s political opponents.

Kim Young-sam also asked me to join hands with the CPD, but I declined. At the time, the three of us were banned from political activity under a special law meant to reform the political landscape.

No matter how nonsense it was, a law is a law, and I believe I should follow it. So instead of joining the CPD, I decided to attend the Democratic National Convention in San Francisco, where I rented a two-room apartment south of the city.

Shortly after, I was contacted by the supporters of Kim Dae-jung, who had been in exile the United States since 1982, when he was released from jail after seeing his death sentence commuted.

Kim’s aides suggested that I meet him, but I declined. Instead I spent my time painting and writing. I had stepped aside from the political center stage, deciding to lay low and refrain from appearing in public.

Some people claimed that I did nothing to help the democracy movement overseas by working with Kim Dae-jung, and some worried that I would forever lose my chance to return to politics. But I judged that while the two Kims were on their own path in their political journey, I was on my own toward my goals.

I didn’t have to be on the same path as them.

On March 6, 1985, the ban imposed on my political activity was lifted, and I was once again allowed to enter politics - the first time in four years and four months. Thirteen other politicians, including Kim Dae-jung and Kim Young-sam, were also allowed to pursue politics.

The press immediately began to speculate when I would return to politics in Korea, and my two older brothers, Jong-ik and Jong-rak, visited me in the U.S. to ask the same question.

“Nothing has been decided,” I told them. “I’ll think about it in time.”

But it wasn’t only the press and my family who were interested in my next move.

One day, a man who told me he was the president of a local Korean university, visited me in San Francisco. He introduced himself as a special envoy sent by Chun Doo Hwan and relayed Chun’s request that I delay my plans to return to the political sphere.

“Come back to Korea after the presidential election next year. And even if you come back, don’t join in politics anymore,” he said.

I just laughed. “You came all the way here from Korea to deliver that message? Why?”

“I’m going back, and I’m not going to say whether I will participate in politics or not. But I can tell you that my resolution will not be broken that easily.”

The alleged envoy then told me that I would be wise to join Chun’s political faction if I ever decided to go into politics again.

“That will never happen,” I said.

On Feb. 25, 1986, I wrapped up my affairs in the United States and left for Korea with my wife, Young-ok. It was my first time in Korea in a year and seven months.

More than 300 people, including members from the then-dissolved Democratic Republican Party, greeted me at Gimpo International Airport. Reporters there inquired about the motive for my return.

“I’m coming home after a short break,” I said. “No reason is needed for a man to come home.”

Then I drove straight to Park Chung Hee’s grave at Seoul National Cemetery. Over the past seven years, not a single commemoration had been held for the late president due to pressure from the Chun government.

Bowing my head before his grave, I told him, “Sir, I will walk my own way from now on to finish the job you and I planned years back. Please look after me.”

I was filled with a new resolution - that I would open the next chapter of my political career.