Employment a struggle for humanities majors

Employment a struggle for humanities majors 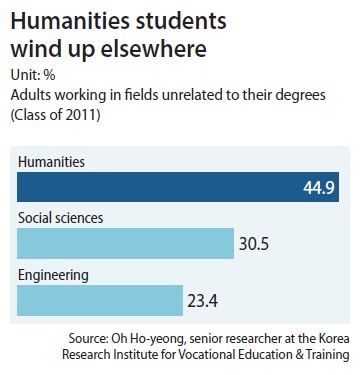 When Ms. Cho graduated from Pusan National University last summer with a double major in communications and German language and literature, finding a job in either of those fields was never on her list of options.

The 26-year-old, who now works at a community service center after having qualified for the state civil service exam, says she’s following the social trend.

“Where I’m from, it would be abnormal to say you got a job in the field you studied in college,” said Cho, who wished to be identified only by her surname. “I tried to enhance my competitive edge in this job market by briefly going abroad for a foreign language program, but matters didn’t change much, which is how I ended up studying to become a civil servant.”

According to a report by Oh Ho-yeong, a senior researcher at the Korea Research Institute for Vocational Education & Training, around half (44.9 percent) of those who graduated from college in 2011 with a humanities degree said they are currently working in areas unrelated to their diplomas.

That number was far higher than for those who had degrees in the social sciences (30.5 percent) or engineering (23.4 percent).

Ms. Lee, who studied Korean language and literature at Ewha Womans University in Seodaemun District, central Seoul, said she didn’t have a choice when she applied for the online marketing division of a telecommunications company and eventually got the job.

“I could barely find a company that preferred Korean language majors,” said Lee, 28. “Unless I searched for a job in publishing or teaching, there was nowhere I could really make use of my studies.”

According to the report, published Thursday, students in the humanities (7,456,000 won) ($6,441) were also spending far more money than their counterparts in social sciences (4,958,000 won) and engineering (5,075,000 won) for expenses related to finding a job, which includes tuition fees for hagwon, or cram schools.

“When you look at the data, you can easily conclude that people in the humanities are going through a rough time,” Oh said. “Engineering students tend to get hired more easily, which is why they feel less pressured to spend extra cash on other qualifications.”

A 33-year-old esthetics graduate from Seoul National University, who now works at a marketing team for a manufacturing company, lamented that it was difficult for her to get information on employment overall.

“I started getting nervous,” the woman said. “I went on a six-month language program to the United States, an exchange program to Germany and got extra language certificates in English and German.”

“In the past, when only a small number of elites went to college, it was the schools’ responsibility to promote academic research,” he said, adding that the same logic no longer applies to students in the current era now that a college diploma has become the norm.