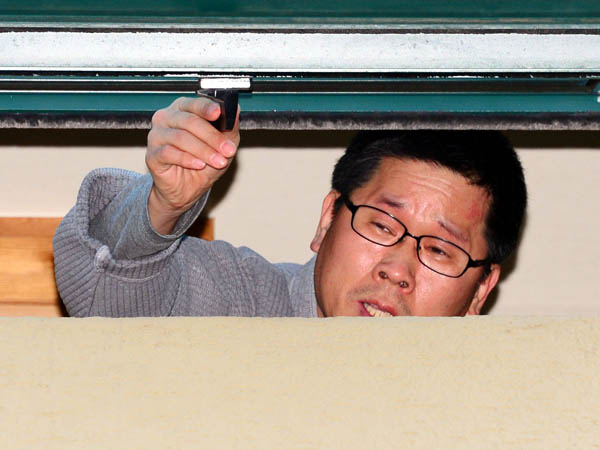 Han Sang-kyun, head of the Korean Confederation of Trade Unions, speaks through a window Tuesday from inside Jogye Temple in Jongno District, central Seoul, after the KCTU held a press conference there. [NEWSIS]

A temple association for the Jogye Temple in Seoul, where Han Sang-gyun, the 53-year-old chairman of the Korean Confederation of Trade Unions (KCTU), has taken refuge since leading an illegal rally on Nov. 14, said Tuesday that it had decided to let him stay until Sunday, but urged him to leave as soon as possible.

The KCTU welcomed the decision by the The Jogye Order of Korean Buddhism Lay Buddist Association and promised at a press conference to decide Han’s fate as soon as possible.

Lee Young-ju, the secretary general of the KCTU, said members would carefully consider the decision and work hard to successfully hold its second mass rally, scheduled for Saturday.

At the end of the press conference, Han looked out the window and pledged to lead a peaceful demonstration in support of workers’ rights.

The 53-year-old, who has been hiding in the temple to avoid arrest, has faced off against temple association members, who have demanded that Han and other key KCTU members leave. A tussle ensued Monday as the KCTU members refused to leave the premises, though authorities confirmed later that day that they had all left except for Han.

Some 600 police were positioned around the temple Monday, waiting to arrest Han.

According to police, around 10 members of the temple association, including President Kim Eui-jung, visited the temple Monday afternoon to request that Han leave and voluntarily turn himself in.

“When Kim demanded Han walk out, he refused to leave and asked to stay there for five more days,” said Park Jun, the vice president of the temple association.

“Kim grabbed him by the collar to drag him out, he failed and instead tore Han’s robe,” he added.

Choi Jong-jin, senior vice chair of the KCTU, held an emergency press conference around 5:30 p.m. Monday in front of the temple, where he said the government was oppressing the temple association.

The police also announced Monday a ban on the mass protest planned for Saturday, to be led by some 7,000 members from 97 progressive civic groups. The mass protest is being held partly in support of Baek Nam-gi, a 68-year-old farmer who was knocked down by a water cannon during the mass rally on Nov. 14, and sustained a head injury.

The police vowed to penalize anyone who took part in the rally on Saturday and hold the organizers legally responsible. They also declared a crackdown on illegal protests.

The Seoul Metropolitan Police Agency said it would react strongly toward aggressive and violent masked protesters who attempted to damage vehicle walls set up by authorities.

About 400 people who participated in the first rally on Nov. 14 are currently under investigation.

Civic groups have also criticized the police for organizing a task force to make arrests, which they argue is similar to what happened in the 1980s under the Chun Doo Hwan regime.

Also on Tuesday, a task force formed in support of Baek filed a lawsuit in the Seoul Administrative Court to reverse the decision by police to prohibit the upcoming demonstration.