Seo molds a team with strategy of energy and excitement

Seo molds a team with strategy of energy and excitement 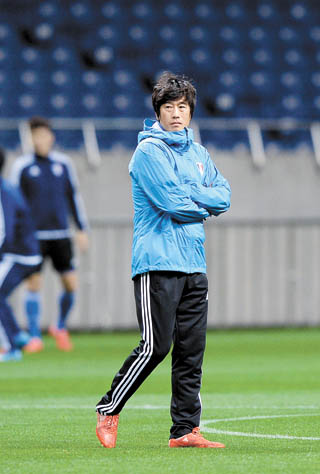 Seo Jung-won has been at the helm of the Suwon Samsung Bluewings for more than 1,000 days. Though he has yet to deliver a K-League Classic championship, the 45-year-old coach has been highly rated for changing the team’s style.

Maybe that’s why he was given another three-year contract at the end of 2014, even before this season started in March. Seo, who also played for the Bluewings from 1999 to 2004, will now serve in the coaching position until 2017.

When he took over the four-time K-League Classic champions, the club wasn’t as rich as it used to be and its mother company Samsung Electronics was shrinking its financial support. And in April, last year, Cheil Worldwide, another affiliate of Samsung Group, took control of management of the team.

In his first year with Suwon, Seo led the team to fifth place, but last year the team advanced to second place. Suwon finished in second place this season again with the same record of 19 wins 9 losses and 10 draws, while watching the title fall into the hands of Jeonbuk Hyundai Motors for the second year in a row. Regardless, the team is heading to the AFC Champions League for the second straight season.

Aside from the team’s results, Seo, a former winger who also played for French club RC Strasbourg and Austrian club SV Salzburg, is praised for changing Suwon’s game to a more exciting and competitive style with short passes and an energetic playing style.

In an interview with Ilgan Sports, Seo talked about his days with the Bluewings and his goal for the remaining season.

Q. When you were appointed as coach you emphasized the team rather than the individual. How did that work out?

A. In the past, our team received the best support and investment. Even those who were on the bench were all national team level players. So, we had a squad with different characteristics. But now we have changed. Although our budget got smaller, the team is more solid. I think we should make fans feel that we are putting forward our best efforts even if we lose. I can see our players doing their best until the final whistle.

How did you change the team’s character?

What’s important is the trust between the coaching staff and players. I don’t sweet talk the players. I don’t want to lie in order to motivate players in the short term. Sweetness is just a second. I always approached players truthfully and candidly. As we gain trust in ourselves, the gap between regular starting members and bench players was reduced.

Do you mean that trust led to competitiveness on the pitch?

I told players that anyone can play the match if they put in their best effort. Although it can take one week or one month, I promised them I will give them an opportunity, and I kept that promise. For this season, we had to play the league, AFC Champions League and FA Cup and I knew it would be difficult with our current squad. So in winter training, I paired two players for each position and focused on training. As a result, our bench players performed well when the team needed it most. We have 32 players in our squad and only one player didn’t play this season. This is a rare situation.

We heard that cohesion inside the team is very strong. Is that true?

Veteran players are showing an example to young players. As they do personal training even on days where there is no team training, young players are also following them. One day, I saw a player who was walking on crutches and another player who had broken ribs coming to our locker and cheering for the other players. By seeing that, I realized that this team has strong team spirit and we would not lose.

You seem to have a very nice image as a manager. But have you ever cursed at players?

Never. Probably the harshest word that I said to players would be ‘is this all you’ve got?’ When I was a player, I didn’t curse or say harsh words to young players.

Some people say that the leader should have a strong fighting spirit and be tenacious. Do you think you are that person?

I do have a strong desire to win. But you don’t’ express that desire by cursing or showing madness. If you can communicate to players with sincerity, players can understand you. If you can respect them, you get more than you want.

You don’t drink alcohol. How do you get rid of your stress?

I like to travel and listen to music. These days, I read a lot of books. I try to relate what’s written in the book with my current situation. Recently, I saw this phrase from a book which states that “your competitor also sweats like you. In order to become better than your competitor, there is only one way: give 10 times more effort than others.”

For the last three years, the team’s budget has been cut. Did you feel financial pressure when you first accepted the job?

I knew there would be a budget cut, but I didn’t know how much it would be. At first, I was depressed. I even thought about drinking alcohol. But my respectful teacher Dettmar Cramer told me, “don’t look what is in front of you, but look further ahead.” I realized drinking is not the solution because that’s like dodging the issue. ?

Suwon hasn’t won the league since 2008. Fans were worried when you first got the job, but now they are supporting you. What happened?

I always feel sorry for our fans. Honestly, we are a big club, and fans want us to win the league. Any coach wants to win the trophy. Whether we are in a good situation or not, we have to sweat more and prepare. I have an earnest desire for this team to be champions again.

What kind of team do you want to make Suwon?

I don’t know how long I can stay with the team, but there is one thing I want to do with this club, which is to create its own tradition. We have veterans like Yeom Ki-hun and Kwak Hee-joo who work diligently and have a good personality. When they retire, I want the club to embrace these players, giving them jobs like youth club coaches. If they later become coaches, young players could follow in their footsteps. I want this club to share its vision with players who are waiting to retire.