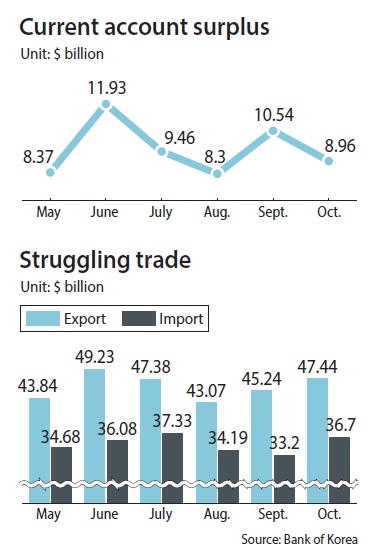 Korea’s current account surplus has continued its record-breaking streak that began in 2012, largely due to the sharp drop in imports, while exports continued to shrink.

According to the Bank of Korea on Wednesday, the country’s current account surplus stood at $8.96 billion in October, bringing the surplus rally to a new record of 44 consecutive months.

The October surplus shrank almost 15 percent compared to the previous month, when it recorded a $10.5 billion excess. However, when compared to a year ago, it was $220 million more, or 2 percent larger.

The accumulated current account surplus in the first 10 months amounted to $87.9 billion, almost 32 percent larger than the $66.7 billion surplus accumulated during the same period last year.

There is concern, however, that the October surplus was not completely due to exceptional growth in the economy but rather a sharper decline in imports, which can be seen either as companies cutting back on their investment or consumer spending diminishing.

Considering the government’s policies to push various discount events, including Korea’s own Black Friday, to encourage consumption, it could mean the industrial production of companies was probably the biggest cause.

Exports in October were $47.4 billion, a fall of 7 percent compared to a year ago. But imports tumbled nearly 15 percent to $36.7 billion.

The central bank, however, continued to dismiss accusations that the surplus was a result of recession as it did in previous months.

“The reason the current account surplus is so huge is largely because trade conditions have improved on the back of falling crude prices that resulted in a sharper drop in imports by value,” said Park Seung-hwan, head of the BOK’s financial statistics department. “When you look at exports by volume, exports grew 2.1 percent while imports saw a 6.1 percent increase year on year.”

Information telecommunication devices such as smartphones were the only exported goods that saw year-on-year growth, while other major export goods, including computer chips and automobiles, declined. Petrochemicals and shipbuilding saw the biggest plunge.

Exports of information telecommunication devices expanded 35.1 percent to nearly $5 billion. Automobile exports, which grew 0.5 percent in September, fell 2.2 percent to $3.5 billion. Computer chips that have enjoyed stable growth in the past months, including a 0.9 percent increase in September, dropped 7.3 percent in October.

But petrochemical exports plummeted 45.1 percent, while shipbuilding saw a greater fall of 63.2 percent.

The primary income account surplus shrank from $737 million in September to $594 million in October, with foreign investors withdrawing their investments.