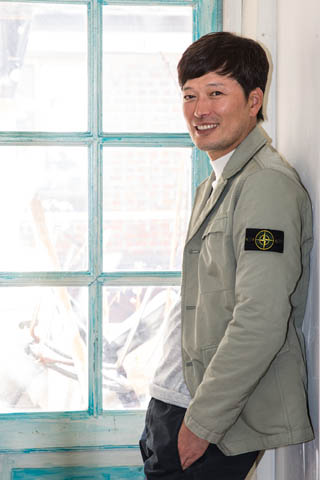 In the fine lines around actor Jung Jae-young’s eyes, there is warmth but also undeniable shrewdness.

It is perhaps because the 45-year-old has been acting every role since he was 20 as if it were his last, with such determination and stubbornness. His philosophy is, “Only when you think it’s wartime does your acting become desperate.”

Jung can be spotted in two recent films: as seasoned entertainment journalist Ha Jae-kwan in the comedy “You Call it Passion” and as film director Ham Choon-su in the art-house film “Right Now, Wrong Then.”

For the latter, Jung won Best Performance by an Actor at the Ninth Asia Pacific Screen Awards, as well as at the 35th Korean Association of Film Critics Awards, in addition to being nominated for best actor at the 36th Blue Dragon Film Awards.

The JoongAng Ilbo recently sat down with the actor to talk about his passion, latest roles and more.

Q. Let’s first talk about “You Call it Passion.” Did you play a reporter based on the impression you got from reporters you met during your career?

A. I think so, but I must say I got to understand them better through this movie. I had thought that they’d be really free. But I learned that just like any employee at a company, they struggle with pressures coming from the top. They may have begun their careers with the big goal of bringing justice to society, but as they have to make a living, they start to make compromises and forget about their vision. And at one point, they just realize, “This is not what I signed up for.”

“Passion” in today’s Korean society doesn’t just mean a good virtue, as seen in the cynical term “passion pay,” which means when employers take advantage of the desperate but passionate youth by underpaying them or not paying them at all.

“Passion pay” also existed in our day; it just didn’t have that name. In my 20s, I earned between 1 million won ($860) and 3 million won a year. I was just so crazy about acting. It’s certainly wrong to exploit youth by taking advantage of their passion.

But the word “passion” shouldn’t have a negative connotation. And it’s not like we the older generation don’t have passion anymore. If you ask a couple who have been married for 40 years if they still love each other, they most likely wouldn’t really use the word “love.” But they are in something greater, something more profound.

You also recently starred in “Assembly,” a KBS drama series, which was your first role on the small screen. What was the experience like?

At first, I was concerned, but it was quite an experience. I’m glad I took on a role on the small screen before I turned 50 because it was physically quite demanding with the script being finalized only at the last minute [which is normal in Korean drama productions]. But after all, working on a Hong Sang-soo film gets you ready for that (laughs).

You won several awards for your role in Hong Sang-soo’s “Right Now, Wrong Then,” which was your second time working with Hong. What’s your next plan?

It was a great honor to receive those awards. I am currently deliberating on one role but still undecided. My priority when choosing my next film is to do something that I can really enjoy. I guess that’s what differentiates me from Ha Jae-kwan in “You Call it Passion,” as he would make decisions based on what makes money (laughs).