After surgery, all walks for Woods

After surgery, all walks for Woods 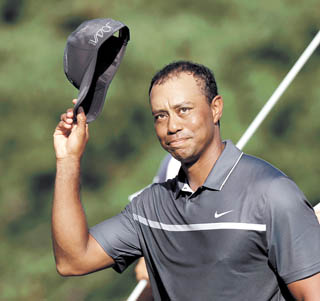 NASSAU, Bahamas - Tiger Woods painted a bleak picture Tuesday on when he can return to golf or even get back to doing anything more than just walking.

Woods had two back surgeries in a span of 18 months followed by what he described only as another “procedure” in the same area in October. He has not started rehabilitation and does not know when his back will allow for that.

“The hardest part for me is there’s really nothing I can look forward to, nothing I can build toward,” Woods said. “It’s just taking it literally just day by day and week by week and time by time.”

Woods is at the Hero World Challenge as the tournament host, not one of the 18 players at Albany Golf Club. The only time he touched a club was to pose for a photo, and he leaned on it while talking to Justin Rose and Zach Johnson on the putting green.

A month away from turning 40, the smile did not come as easily for Woods.

He has not competed since Aug. 23 at the Wyndham Championship in Greensboro, North Carolina, where he attracted record crowds in his first appearance and played his best golf of a bad year. He went into the final round two shots behind and tied for 10th.

He didn’t realize that would be his last event of the year, and last tournament for longer than he knows.

“Was it a surprise? Yeah,” Woods said. “Because as I was alluding to that week and subsequent weeks, I felt my hip was killing me and I didn’t think it was coming from my back. We worked out in the trailer each and every day and just tried to loosen up my hip. And OK, fine, we went out and played. But I didn’t feel any back discomfort.

“Come to find out it wasn’t my hip, it was coming from my back.”

He had another microdiscectomy Sept. 16 and then he revealed he had another “procedure” Oct. 30, which he said was in the same spot. Asked the degree to which he can function, Woods said, “I walk. I walk and I walk some more.”

Woods, who has spent 683 weeks at No. 1 in the world ranking, is now at No. 400, his lowest as a professional. He has not won since the Bridgestone Invitational in 2013, when he was the PGA Tour player of the year.

And now he can’t even begin to imagine when he might play again. AP