Compact SUVs all the rage among female buyers

Compact SUVs all the rage among female buyers 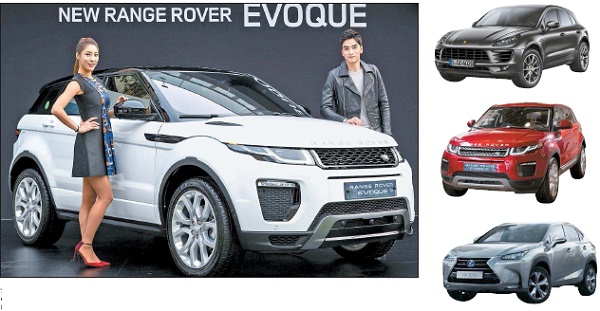 The new Range Rover Evoque premium compact SUV was introduced to Korean customers in October. It has gained wide popularity for its dynamic design and strong driving performance. Other popular SUVs in Korea include, from top, the Porsche Macan S Diesel, Jeep Renegade and Lexus NX300h. [JAGUAR LAND ROVER KOREA]

Luxurious compact SUVs are hotter than ever thanks to their growing popularity among female drivers, and automakers are racing to roll out new designs that cater to the segment.

With women accounting for about 40 percent of total compact SUV sales in Korea, automakers are doing everything from adding new technologies to reducing the overall size of forthcoming models.

The most popular compact SUV on the market is the new Range Rover Evoque, offered by Jaguar Land Rover Korea.

The model is a revamped version of the first Evoque, which was first introduced in 2011 and sold about 390,000 worldwide. The previous model was so popular among consumers living in the posh Gangnam District that it was informally dubbed the “Gangnam mom SUV.”

The new Evoque features a redesigned exterior and new engines. It is offered in five options - three diesel and two gasoline - with the diesel-engine models offering superior fuel efficiency at 13.8 kilometers per liter (32.5 miles per gallon).

The diesel options include turbocharged Ingenium engines, also used in the Jaguar XE, and generate up to 180 horsepower. All offer adaptive LED headlamps, which illuminate blind spots by shining in the direction the steering wheel turns.

The Evoque also includes adapted All Terrain Response features, which helps drivers negotiate difficult or slippery terrain by maintaining a set speed without any pedal input. The four-wheel drive option includes Active Driveline technology, which switches between two- and four-wheel drive within 0.3 seconds when needed.

The Gesture Tailgate function allows drivers to open and close the tailgate automatically with the wave of a foot beneath the rear bumper.

Despite its high starting price of 75.6 million won, Porsche sold 774 units through November of this year - 87 percent more than the same period last year.

Toyota’s premium Lexus brand released its compact hybrid NX300h SUV a year ago, selling 635 units through November of this year.

One of its biggest features is its fuel efficiency, at 12.7 kilometers per liter.

Jeep entered the compact SUV market with its new Renegade in September, selling 336 units in its first two months on the market, with many of those going to women.

“Female drivers prefer and feel more comfortable driving compact SUVs compared to driving bigger ones,” Han Young-min, a professor at Ajou Motor College, said. “The compact SUV market will continue to grow for quite some time.”