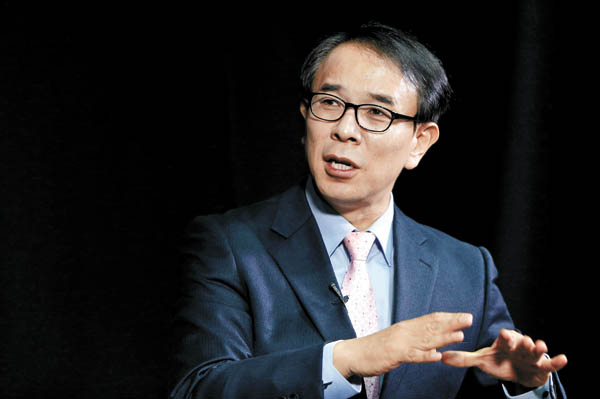 The world witnessed a series of terrible terrorist attacks on Nov. 13 in Paris. Armed members of the Islamic State (ISIS) killed more than 130 people at a football stadium, a local concert hall and various restaurants around the city. The Paris slayings showed that terrorism has penetrated the daily lives of ordinary people.

Just a week after, the JoongAng Ilbo featured a picture of a foreign worker holding a flag representing the Al Nusra Front, another Muslim extremist group, at Mount Bukhan in Seoul. For a long time, the idea of terrorism seemed like something restricted to the Middle East, something that couldn’t affect Korea. But now, those threats have crossed borders and impacted the world.

Why has terrorism spread across the globe? To learn more, the JoongAng Ilbo sat down with Seo Jeong-min, an expert on the Middle East and a professor at Hankuk University of Foreign Studies.

Q. The world has been on heightened alert since the Paris attacks on Nov. 13. ISIS, which is known to have abducted foreigners in the Middle East and beheaded them, has now expanded their scope and killed hundreds of innocent people in one of Europe’s centers. Compared to previous terrorist attacks, some observers have said that the latest was “an act of war.” In terms of the development of terrorism, how significant were the attacks in Paris?

A. Indeed, it was a very shocking incident. What we should notice first is that the attacks aimed at soft targets, which are private facilities. Secondly, well-organized ISIS teams plotted the plan and carried out simultaneous attacks in different places. The terrorists were divided into three teams, and it took only three hours to attack six places, which made counterattacks almost impossible. Third, but not least, it was “network terrorism.”

The terrorists didn’t physically bring bombs from the Middle East to Europe. Potential terrorists living in a variety of countries were manipulated to plant bombs or serve as suicide bombers there. The nine terrorists who were found to be accomplices in the latest attacks turned out to be French, Belgian, Egyptian and Syrian nationals.

How was a “global attack” possible?

The power of the terrorist attacks comes from social networking services (SNS). They collect information and deliver orders via SNS. In the past, terrorists carried weapons or bombs to target destinations. Now, their leaders send orders to followers in every part of the world. They download information and execute those instructions. It can also be referred to as “downloadable terrorism.”

With smartphones, the terrorists can share information regarding how to make bombs and weapons and figure out the whereabouts of their targets, making them able to carry out attacks anywhere, anytime. The Paris attacks went as big as targeting the French president. If the terrorists had passed the security check at the football stadium, it could have been even more catastrophic. No one can confidently say they are safe from terrorism.

There have been a lot of terrorist attacks this year alone. On Aug. 21, there was a failed attempt on the high-speed Thalys train in France. And in Turkey, a suicide bomber killed about 100 people. On Oct. 31, a Russian flight was hijacked and crashed after a suicide bomber detonated an explosive as it was flying over Egypt. And then there were the Paris attacks. How big and strong is ISIS?

They are very different from Al Qaeda. Al Qaeda was a traditional terrorist group. They plotted the tragic Sept. 11 attacks, but after that, they hid away and made attacks only intermittently against the U.S. Army in Afghanistan. ISIS has now dominated eastern Syria and northern Iraq and actually declared that they are a state - they are running a quasi-state system. We should be aware that they are producing a variety of information and recruiting members across the world. It is not a simple terrorist group but a huge rebel organization in the form of a quasi-state.

Does ISIS have the ability to attack Washington, Rome and London as they declared?

I think they do. They make network attacks. Al Qaeda also had its own network, but it was lax. ISIS, on the other hand, has a solid and strong network based on information communications technology. When ISIS produces information and disseminates it in the form of video clips via its network, its followers across the globe view them and send them to others. They have a decentralized structure to spread information. The global hacking group Anonymous is currently attacking as many as 50,000 Twitter accounts from ISIS. Each account has more than 1,000 followers, and it is estimated that ISIS has a network that reaches about 50 million people. This is why the Paris attacks were possible.

What is the back story around the organization’s growth?

There were many reasons. Politically, ISIS would not exist if the Iraq War had not happened. The subsequent war in Syria spurred them to declare the state.

Western countries say the Iraq War was legitimate because it dismantled the dictatorship of Saddam Hussein. The war in Syria started from a civilian uprising against Bashar al-Assad. Are you saying democratic or anti-dictatorship movements have contributed to the creation of this terrorist group?

Hussein had to be ousted. I am not saying that the Iraq War was unjustified. But forces discontent with the fall of the Hussein regime are now making trouble. About 20 percent of the Iraqi population is Sunni, like Hussein. They lost their power because of the war. They were kicked out of the government and the army. In Iraq, a free and fair election would create a Shiite government. Shiite Muslims account for 65 percent of the Iraqi people. They are retaliating against the Sunnis now, and some Sunnis are joining ISIS.

What about young people in other countries who are joining ISIS?

That is due to economic and social problems. ISIS is luring young people of different nationalities with the promises of money, jobs, housing and marriage. Koreans may think that’s not attractive enough, but in most Middle Eastern countries, except for the oil producers, many young people are living in poverty. There were Belgians among the accomplices in the Paris attacks. In the Muslim areas of the country, most young Muslims don’t have jobs and are dissatisfied with their lives. Marriage is an elusive dream for them. In the Middle East, men can’t marry without having a house. ISIS could be attractive enough to those young men. ISIS pays them $300 to $500 a month, which seems little to us, but it is not to them. An entry-level Egyptian civil servant makes $150 a month. And there are about 4,000 Tunisian ISIS members. Tunisia is probably the most liberal Muslim country ... but they are poor. That’s why many Tunisians are joining ISIS now.

ISIS included Korea as one of 65 crusader states. What is the possibility of ISIS committing a terrorist attack here?

It’s quite a possibility. The risks are gradually mounting. As I said earlier, terrorism in the 21st century is based on networks. ISIS could embrace some people here through SNS. Regardless of nationality, once ISIS reaches discontented forces in Korea, the country will be at serious risk.