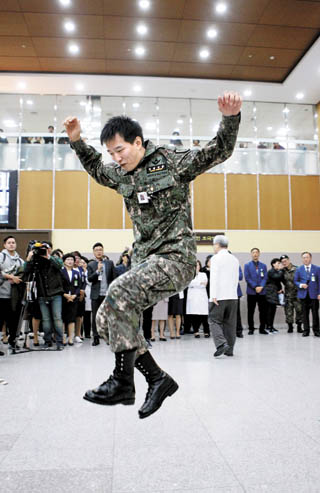 Staff Sergeant Kim Jeong-won, who lost his right ankle by the explosion of a land mine planted by North Korea in the demilitarized zone in Paju, northern Gyeonggi, on Aug. 4, jumps in front of reporters on Wednesday, leaving the VHS Medical Center in Dunchon-dong, southeastern Seoul, after receiving a rehabilitation treatment. [OH JONG-TAEK]

Staff Sgt. Kim Jung-won, whose right leg was amputated below the knee following a land mine blast Aug. 4, in the demilitarized zone (DMZ), was discharged from VHS Medical Center in Dunchon-dong, southeastern Seoul, on Wednesday after going through nearly two months of treatment and rehabilitation.

Dressed in his military uniform, the 23-year-old strode out from the hospital elevator to stand before a throng of reporters.

Kim was limited to the use of a wheelchair, his right leg still in bandages, when he was discharged from the Armed Forces Capital Hospital in October. But after successful treatments in the orthopedic, dermatology and mental health departments, he was finally able to walk out of VHS Medical Center on his own.

Smiling bashfully, Kim raised both his arms and jumped into the air. “All of you let me jump again,” he said.

Now he uses the aid of a prosthetic leg to walk, but he moves so naturally it is hard to notice.

According to the Ministry of National Defense, Kim will be sent back to the Armed Forces Capital Hospital, where he will receive his last treatments, after which he will then return to the Army.

On Wednesday, the JoongAng Ilbo got to ask Kim a few questions:

Q. Wasn’t the treatment you received hard to endure?

A. It was like a fight with myself. I felt thankful for the support so I did my best to recover.

I felt hopeless when I woke up in the intensive care unit. I went unconscious immediately after the land mine exploded. But now ... I have realized how precious the ability to walk is.

What are you going to do now?

I was in the reconnaissance forces before I was wounded but I’m not sure whether I can still serve there or not. I still want to contribute to the military.