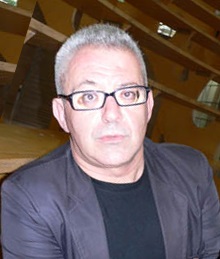 The Ministry of Culture, Sports and Tourism announced Wednesday that it plans to appoint Spanish-born Bartomeu Mari Ribas to lead the National Museum of Modern and Contemporary Art (MMCA), despite resistance from local art circles.

He would be the first foreigner to take helm of a Korean government organization.

German-born Lee Charm served as the president of the Korea Tourism Organization between 2009 and 2013, but was a naturalized Korean citizen by that time.

“We believe with his professionalism and international networks, Bartomeu Mari Ribas would be able to devise institutional strategies for MMCA to make a leap as a world-class art museum,” the ministry said in a statement on Wednesday.

The position for MMCA director has been vacant for more than a year since the Culture Ministry dismissed Chung Hyung-min in October 2014 amid allegations that she abused her authority.

It began a hiring process in January but concluded in June that none of the candidates who made it through the hiring process were eligible for the post. One candidate, Choi Hyo-jun, the former director of the MMCA’s branch at Deoksugung, has alleged that he was rejected because he did not match the minister’s preferences.

After the Culture Ministry reopened the hiring process in July, Minister Kim Jong-deok stated several times that he would consider a foreign applicant for the position, declaring that there were no boundaries when it comes to contemporary art - an explanation that drew mostly negative responses from the local art scene.

“A national art museum is a place where people should accumulate and study the identity of Korean art,” said Kim Chan-dong, the director of the Gyeonggi Cultural Foundation’s museum. “Globalization and international networks are important, too, but at the moment, producing content based on streamlining policies and defining identity is more urgent [for the MMCA].”

Jung Jun-mo, an art critic, added that, “a foreign director would work at a modern art museum where the presentation comes before content.”

He went on to say, however, that the MMCA was an institution that was creating the identity of a country and its people, to mean that content is more important than presentation.

Last month, as speculations surfaced that Mari was likely to be appointed as the new director of MMCA, a group of hundreds of artists issued a statement denouncing the move. They particularly questioned his qualifications, citing a censorship scandal that eventually led him to step down as director at the museum in Barcelona.

In March, Mari canceled the museum’s upcoming exhibition, “The Beast and the Sovereign,” because it included a sculpture by Austrian artist Ines Doujak that illustrates a sodomized Juan Carlos I, the former Spanish monarch. He resigned amid the controversy, and two curators who approved of the sculpture were also let go at his request.

“The reason we are pointing to the ‘The Beast and the Sovereign’ scandal is because [if the appointment is realized], the museum would only become further docile and critical imagination in contemporary art that’s free from power would neither be encouraged nor tried,” the statement read.

In response, the Culture Ministry on Wednesday said that in an interview with the hiring board, Mari had explained that it was a decision he had to make as a director and in order to protect the museum, and that he had taken full responsibility and resigned.