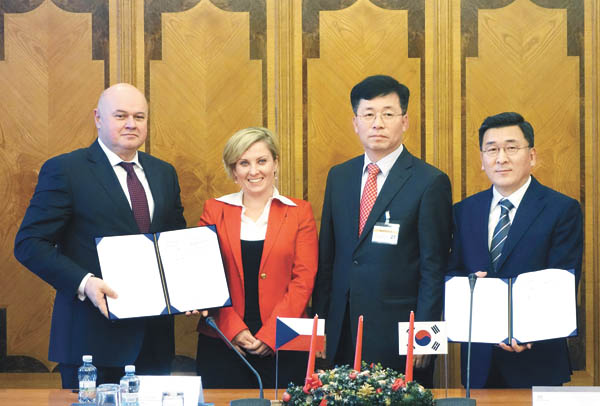 The governments and business groups of Korea and the Czech Republic are to cooperate in nuclear power, electric vehicle and other clean energy industries.

The decision follows President Park Geun-hye’s presidential visit to the country and a summit with her counterpart, President Milos Zeman, in Prague on Wednesday.

Energy ministries and the state-run power companies of both countries reached a memorandum of understanding on Tuesday and Wednesday to start work on nuclear power projects.

“The Czech Republic’s nuclear market will be a significant stepping stone for Korea to export our nuclear technology to Europe,” the Ministry of Trade, Industry and Energy said in a statement.

Korea’s homegrown APR-1400 reactor was designed based on American technological standards. Korea has been working on developing an adjusted model, called EU-APR, to meet European standards and export APR models to EU countries. The APR tailored to EU standards is currently in the assessment process and is scheduled to be completed by 2017.

Through the contract, the Czech energy authority will work with the Korea Electric Power Corporation (Kepco) in developing future nuclear energy business models, and form a consortium when entering a third market.

The Czech Republic is one of the few countries in Europe that is promoting nuclear power in their energy mix.

The Czech energy authority plans to raise its stake in nuclear power to between 46 and 58 percent of total electricity generated by 2040, up from 35 percent as of earlier this year.

The European country, which is currently operating six nuclear reactors, is reportedly planning two additional reactors to accommodate this long-term energy plan. Details are expected to be announced in June, and the open bidding process will take place in 2019.

Executives from some 150 companies, including Samsung Electronics, Hyundai Motor, LG, Kepco, CJ and Korean Air participated in the business forum.