At Daegu center, a Walnut grows

At Daegu center, a Walnut grows 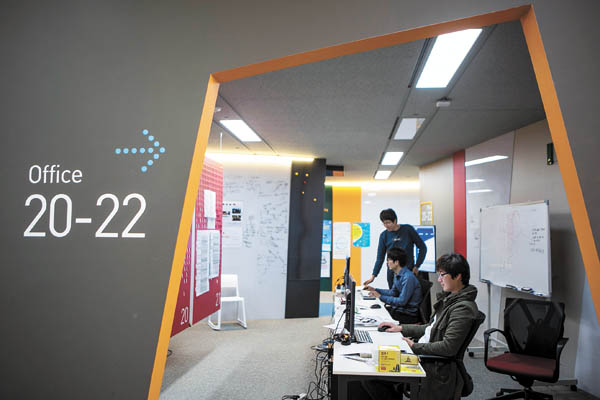 Inside the C-Lab at the Daegu Center for Creative Economy and Innovation, some 350 young engineers have set up shop to build their companies. [BLOOMBERG]

DAEGU - Lee Kyung-dong, a Daegu-born computer programmer, began developing computer-aided design (CAD) software for textiles as a hobby while working for a start-up in 2007.

His software had several competitive edges over the existing few that had dominated the global market for two decades.

Lee distributed his product for free for two years, receiving constructive feedback from users in exchange. The number of local fabric producers using his software surged to the hundreds, which led him in 2011 to turn it into a business opportunity. 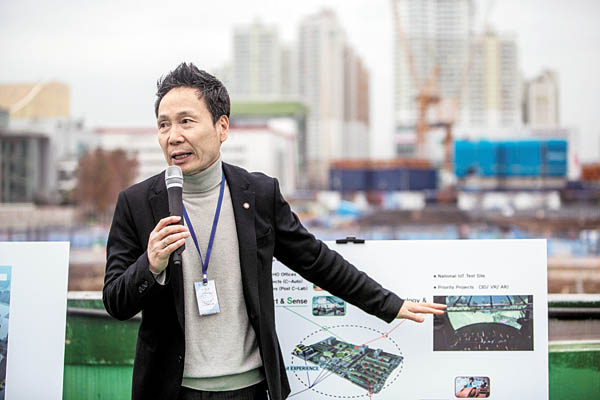 Kim Sun-il, president of the Daegu Center for Creative Economy and Innovation, explains the new campus scheduled to open next year. [BLOOMBERG]

After undergoing cycles of trial and error that nearly pushed him into bankruptcy, he knocked on the door of the Daegu Center for Creative Economy and Innovation (CCEI) in September last year.

The center was recruiting the first batch of start-ups to be supported by C-Lab, its incubator program. Start-ups between one and three years old were eligible to apply.

“I knew I wasn’t competent enough in my role as a CEO with only my ability to develop software,” he told a group of reporters on a tour of the center in late November. “So my mentor at the center was enormously helpful. Being backed up by Samsung has added value and credibility when it comes to negotiating with businesses overseas.”

Walnut is one of 17 start-ups that graduated from the C-Lab in May, as part of its first six-month cycle since the Daegu CCEI opened with support from Samsung Electronics in September 2014.

The Daegu center is the first among the 18 CCEIs that have become operational over the past 15 months, part of partnerships between local governments and either conglomerates or large companies around the country.

The CCEIs are the brainchild of the Park Geun-hye administration’s signature creative economy agenda.

And for Lee, at least, that agenda is paying dividends.

Walnut has posted revenue of 620 million won in the past six months, received over 200 million won from investors and is set to seal a deal with a Chinese company for a joint venture in March.

The textile CAD software market in China, the world’s second-largest economy, is 40 times bigger than that in Korea.

Walnut is also developing customized programs for brand-new fabrics for Samsung C&T’s fashion arm, another local giant, Kolon, as well as Nike and Adidas - partnerships Lee never could have imagined before joining the C-Lab.

The second batch of 18 start-ups is about to exit the C-Lab later this month, and the center has already picked the third class last month. It even plans to recruit teams from foreign countries, with two Brazilian start-ups set to join C-Lab next year.

Participants’ business fields range from sewing machine parts to car parts - traditional strengths of Daegu, the city that spearheaded the country’s industrialization in the 1970s and ’80s.

As manufacturing has contributed less and less to the national economy, the hometown of President Park is faced with the task of “innovating the traditional businesses in a creative manner,” Kwon Young-jin, mayor of Daegu, told reporters.

Daegu has set the ambitious goal of becoming a hub for driverless and electric vehicles. The city clinched a deal with Renault Group in October to collaborate on electric vehicle parts for the French auto giant, and in exchange, Renault will help Daegu install infrastructure related to the production of electric vehicles.

The mayor said the Daegu CCEI will be leading research on future vehicle platforms, producing and testing driverless vehicle parts, and stepping up cooperation with other global automakers.

The agenda matches that of Samsung Electronics, which sees futuristic vehicles as one of its key future growth drivers, but Daegu CCEI President Kim Sun-il stressed that this doesn’t mean the center will be directly involved in smart car R&D work for Samsung Electronics.

Samsung has been cautious about its re-entry into the car business, as its last attempt - a joint venture with Renault in the late ’90s - failed.

But many observers say the world’s No. 1 smartphone and TV producer won’t be able to resist facing off with other global giants like Google and Apple, who are also keenly interested in creating smart cars, particularly as sales of smartphones, Samsung’s key revenue source, have been faltering in recent years.

If Samsung does enter the fray, the Daegu center is anticipated to play an increasingly important role in its efforts.

From the beginning, the CCEI initiative faced criticism from skeptics who claimed the centers were the result of the government twisting the arms of Korea’s top conglomerates, who had little interest in participating.

But the president of the Daegu CCEI, a former Samsung employee and start-up founder in Silicon Valley, claims that very idea of the government taking the lead in propelling start-ups should be seen as a “unique initiative that deserves positive assessment.”

The center is scheduled to relocate to the Daegu Samsung Creative Campus at the end of next year. The 22-acre venue in a residential area with apartment complexes, a movie theater and shopping malls is where Cheil Industries, the fashion arm that was merged with Samsung C&T in September, was established in 1954.

The campus will accommodate a cultural center, shopping mall and atelier, as well as the CCEI. Samsung is spending 90 billion won to develop the new location.

“Will the center persist even after President Park’s term ends?” Kim said, “Nobody knows. Who can guarantee a certain company’s sustainability? … We, the members of the center, will have to produce tangible fruits and success stories in order to sustain it.”