Chinese official weighs in on ties

Chinese official weighs in on ties 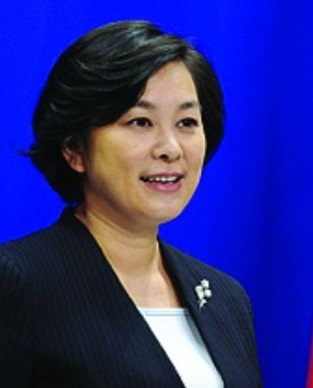 Beijing continues to value its traditional friendly relations with Pyongyang, but the current “era and global situation is also changing,” a Chinese Foreign Ministry spokeswoman said in a recent interview, regarding North Korean denuclearization.

“North Korea and China’s relationship is linked by blood and is a traditionally and historically a friendly relationship,” Hua Chunying, the spokeswoman for the Chinese Foreign Ministry, said earlier this week during a roundtable discussion with a group of visiting Korean reporters in Beijing.

“But you will be aware of the reason why China and North Korea’s relationship has cooled until recently. This was because of each side’s position on the nuclear issue.”

Beijing holds three consistent positions on the nuclear issue, she said ? that the denuclearization of the Korean Peninsula be realized, that peace and stability be maintained, and that a peaceful means for resolving the issue be found through dialogue.

“Some friends in South Korea or the United States say that China can put some more pressure on North Korea, but China internally opposes North Korea’s development of nuclear weapons,” said Hua, who serves as the deputy director of the Information Department under China’s Foreign Ministry. “We have continuously conveyed our principles to North Korea, and because of this, North Korea probably feels uncomfortable.”

“However, I think that resolving the nuclear issue is not fundamentally inconsistent with China-North Korea relations,” she continued. “Through the stable and sound development of the China-North Korea relationship, we can have better dialogue, which can eventually help resolve the nuclear issue through the resumption of the six-party talks,” initially established with the aim of convincing Pyongyang to abandon its nuclear ambitions and to resolve security concerns.

The talks, however, have been stalled since late 2008, when Pyongyang walked away from negotiations, which involve China, Japan, Russia, the United States and the two Koreas.

In regard to the recent thaw in ties between Beijing and Pyongyang, Hua said, “We have maintained dialogue through China-North Korea diplomatic channels, and when something happens, we have at each time exchanged our positions.”

This included the visit by top Chinese official Liu Yunshan, a member of the Politburo Standing Committee, to Pyongyang in October, she said, and the visit by Choe Ryong-hae, a secretary in the North Korean Workers’ Party, to Beijing for its military parade in September. During these visits, both sides agreed to advance stable relations, she said.

On relations between Seoul and Beijing, Hua replied, “In the past several years, the relationship has advanced rapidly and the leaders of China and South Korea have had deep exchanges. President Xi Jinping and Premier Li Keqiang visited Korea, and when President Park Geun-hye came to China and visited Xi’an [in Shaanxi Province], she was warmly welcomed by our people. ”

Hua also addressed the need to speed along negotiations on the delimitation of sea boundaries between South Korea and China and resolve it in a “positive and constructive” manner.

The two sides have had discussions over sea boundaries over many years and will hold another round of talks later this month.