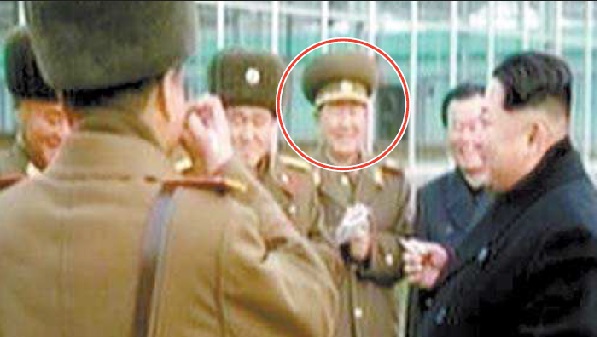 North Korean leader Kim Jong-un, right, is accompanied by Hwang Pyong-so, third from right, the director of the General Political Bureau of the North Korean Army, and Oh Su-yong, second from right, the secretary of the Central Committee of the ruling Workers’ Party, on a field guidance trip to a tree nursery. [Korean central TV]

Top North Korean official Hwang Pyong-so appeared at an official event presided over by leader Kim Jong-un, breaking a 22-day absence as well as speculation over his whereabouts.

The director of the General Political Bureau of the North Korean Army, Hwang accompanied Kim on a field guidance trip to a tree nursery operated by the Army, the country’s Korean Central News Agency reported on Thursday.

The 75-year-old’s three-week disappearance aroused suspicions concerning his status, particularly over the state of his health; and some observers surmised after his absence at the funeral for veteran military marshal Ri Ul-sol in early November that Hwang may have gone to China to seek medical treatment.

Hwang has played a key role in recent high-level meetings between the two Koreas.

In August, he and Kim Yang-gon, the director of North Korea’s United Front Department, were integral in the signing of a six-point agreement that quelled tensions that nearly put the two Koreas on the brink of war.

The deal was concluded along with Kim Kwan-jin, South Korea’s director of national security, and Unification Minister Hong Yong-pyo on Aug. 25, after 43 hours of marathon talks at the border village of Panmunjom.

The sudden absence of high-level officials in North Korea is often suspected to be the result of a purge or execution, particularly given the events that have transpired since Kim Jong-un came to power in 2011.

In 2013, the young leader executed his powerful uncle Jang Song-theak and several of the elder statesman’s aides in a purge that many analysts interpreted to be part of Kim’s attempts to solidify his authority.

The KCNA also reported that Ma Won-chun, the director of construction at the powerful National Defense Commission, had been promoted as the minister of land and environmental protection.

The three-star general was believed to have been purged last year after Kim Jong-un complained that the renovation of the North’s Sunan International Airport, which opened in July, did not adequately reflect the country’s “Juche” ideology.