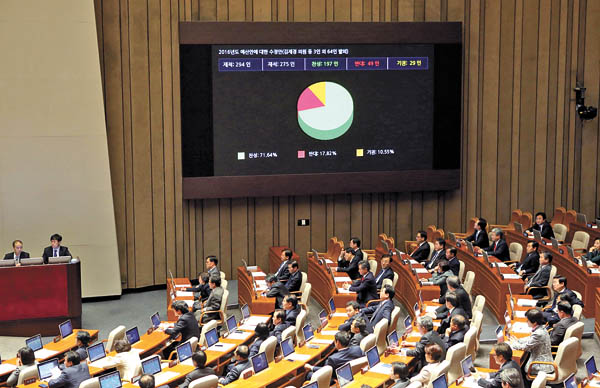 The ruling and opposition parties passed a 386.4 trillion won ($331.4 billion) budget for the central government early Thursday morning, once again failing to meet the statutory deadline as their bickering continued overnight.

The ruling Saenuri Party and main opposition New Politics Alliance for Democracy (NPAD) agreed to pass the budget bill at a voting session on Wednesday, in accordance with the Constitution, which stipulates that the National Assembly must pass next year’s budget by Dec. 2 to allow a 30-day preparation period for its implementation. The two sides, however, continued last-minute backroom dealings on other economic bills, leading the budget’s passage to come at 12:48 a.m. Thursday.

Of the 275 lawmakers who attended the vote, 197 supported the budget bill, 49 opposed and 29 abstained.

The remaining three were demands by the NPAD, including a bill to improve fair trade between conglomerates and authorized dealers.

A series of auxiliary bills linked to the budget bill were also passed on Thursday.

Among them was a sweeping revision to Korea’s tax system in which the government will tax religious leaders for the first time. The government will collect income taxes from pastors, clergy and monks starting in 2018.

A look into the specifics of the budget plan showed that the lawmakers - from both the ruling and opposition parties - were just going after votes in their electoral districts ahead of the April general election by initiating pork-barrel projects and securing budgets.

The ruling and opposition parties added 55 new infrastructure projects, worth 98.5 billion won, to accommodate lawmakers’ demands to attract investments in their districts. The money will mostly be used for feasibility studies for new projects, and experts worry that the burdens will snowball in a few years, when the projects actually move forward.

Political heavyweights in the ruling party, in particular, enjoyed increased funding for their districts.

Rep. Kim Jung-hoon, the ruling party’s chief policy maker, secured 20.3 billion won of budget funding in the form of investments in a guarantee fund for the struggling shipping industry. The organization will be located in his constituency, Nam B District in Busan.

Rep. Kim Jae-gyeong, chairman of the Special Committee on Budget and Accounts, secured 41.2 billion won in additional budget money for his Jinju B District, and Rep. Kim Sung-tae, the Saenuri’s chief negotiator on the committee, got 60 billion won for his Jangseo B District in Seoul.

In total, the five increased their districts’ budgets by 180 billion won.

Rep. Choi Kyung-hwan of Gyeongsan, North Gyeongsang, who also serves as the deputy prime minister for the economy and finance minister, scored an additional 7 billion won on the government proposal of 232.1 billion won for a railway project in his district.

The situation was not much different for the NPAD. The budget for the metropolitan railway project between Sasang and Hadan in Busan was increased by 15 billion won in NPAD Chairman Moon Jae-in’s constituency.

Moon himself voted against the budget bill, explaining after the vote that he did so because lawmakers had reviewed the budget half-heartedly.

The operational budget for the Asia Culture Center in Gwangju was increased by 8 billion won to reach 57.3 billion won at the demand of NPAD lawmakers representing the city. An additional 2 billion won budget was also assigned for the 2019 World Aquatics Championships.

Throughout Wednesday, the NPAD fought against the Saenuri Party’s attempt to pass the budget and other economic bills, but it wasted no time to use the passage for its political campaign. Even before the budget was passed, the NPAD spokesman’s office issued a press release to promote the NPAD’s accomplishment.

In the statement, the party noted that it has won more funding for 31 programs, including 60.2 billion won in state funding for 60,000 senior citizen centers around the country. While the party glorified its role in the budget’s passage, its chairman ironically voted against it.

While the lawmakers only focused on their accomplishments for their districts, conspicuously missing was a serious consideration for how to effectively spend tax money.

Hong Sung-gul, a professor of public administration at Kookmin University, said the ministries would not actually be able to spend the budgets earmarked for various pork-barrel projects hastily created by lawmakers for their election campaigns.

“During the course of government spending, many of the budgets will be left unused next year,” he said.