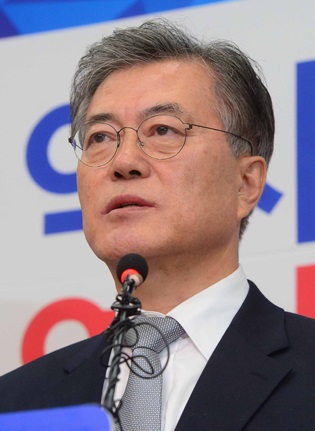 Opposition party chief Moon Jae-in on Thursday rejected fellow party lawmaker Ahn Cheol-soo’s demand that he relinquish his leadership role and that the party hold a convention next month to elect a new leader, sending a firm message to members that he will stay in control of the party stricken by infighting.

“If we hold a party convention [to elect a new leader], it will only serve to deepen the division of the party with members putting their political careers on the line,” said the leader of the New Politics Alliance for Democracy (NPAD) during a hastily arranged press briefing at the National Assembly.

A somber-faced Moon continued that the party can’t waste time deepening the division when party unity is needed most for a victory in the general election next April.

Moon’s flat-out rejection of Rep. Ahn’s demand for a party convention four months before the all-important general election has added to uncertainty over the fate of the party, which has suffered from an acute rupture among party members of different factions.

Ahn, a former software mogul, called for a party convention next month, saying it is the only viable way to completely reform the party and put an end to division.

Ahn made the demand as he turned down Moon’s proposal that the two form a troika with Seoul Mayor Park Won-soon to lead the party in the general election.

In making his argument for the party convention, Ahn contended those who would run to replace Moon should campaign with their own visions for the party.

He also stressed that a set of reform plans approved by Moon’s leadership earlier this year should be scrapped in a direct jab at the current leadership.

Moon also took aim at Ahn on Thursday for his rejection of the joint leadership proposal, saying, “I can’t see why things that people consider common sense can’t happen.”

He also stressed that the party would soon enter into full campaign mode by forming election preparatory bodies under his leadership, displaying additional signs of defiance to Ahn.

With Moon’s firm stance, watchers are now looking for how Ahn, the former co-chairman of the NPAD, will react.

It is possible he could defect from the party with other disgruntled members to combine his political strength with that of independent Rep. Chung Jung-bae, who is in the process of forming his own party based in the Jeolla provinces.