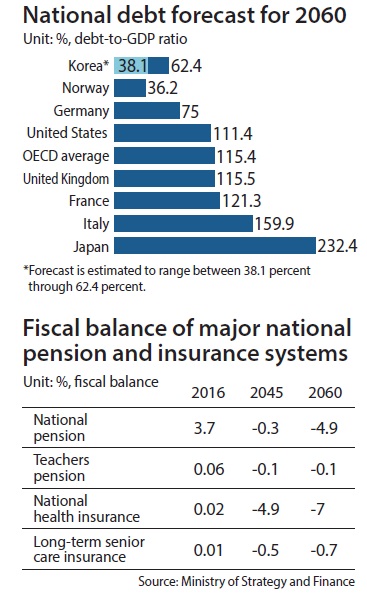 Korea’s national debt could exceed 100 percent of its gross domestic product by 2060 if current tax spending practices remain the same.

The Ministry of Strategy and Finance published the nation’s first long-term economic outlook report, which estimated the fiscal status of the government and social insurers like the national pension system from 2016 through 2060 at the fiscal strategy council meeting held on Friday.

“The lowest and highest debt-to-GDP ratios we calculated are substantially lower than those of other OECD countries,” Roh Hyung-wook, head of the fiscal management division at the Finance Ministry, told reporters at a briefing.

All estimations assumed Korea’s GDP will grow an average 1.9 percent from 2016 through 2060.

The ratio in 2060 is predicted to be 38 percent at the lowest if the government continues to overhaul its spending practices, the Finance Ministry said. It continued that the ratio could hit 62 percent at its highest if the nation’s debt continues to rise at the same rate as GDP.

This is substantially lower than the forecast by the Organization for Economic Cooperation and Development, which estimated that member countries’ debt-to-GDP ratios will average 115.4 percent in 2060.

But in its report, the Finance Ministry acknowledged its estimations excluded three factors related to the nation’s rapidly aging population, which would push the ratio way up.

First, if the government makes optional expenditures involving social welfare mandatory, which could be as high as 10 trillion won ($8.6 billion), the national debt will rise by 26.5 percentage points to 88.8 percent as of 2060.

Second, if the government raises the base pension payment by tying it to average income growth - which naturally rises due to inflation - the ratio could rise 37 percentage points to 99.2 percent in 2060.

Finally, if the government fails to meet its annual average GDP growth goals over the next 44 years, the country’s ratio could climb 32 percentage points to 99.8 percent.

If all three of these scenarios occur, the country’s ratio would be around 158 percent.

But even if just one of the three scenarios happens, the ratio would still near 100 percent.

“The government should be coming up with policies to control the rate of expenditure growth, and should not implement new mandatory expenditure categories [like social welfare] if there is no new source of financing,” Deputy Prime Minister and Finance Minister Choi Kyung-hwan, who also chaired the council, said at the meeting.

The ministry also emphasized that the government must keep implementing laws in the future to make spending efficient, and immediately implement new measures like the “pay-as-you-go principle,” which would require lawmakers and bureaucrats to come up with alternative revenue sources before passing legislation that requires new spending.

Meanwhile, in terms of state-run funds, the national pension system is expected to run dry in 2060, after first posting a deficit in 2044, if the current spending structure is maintained, the Finance Ministry report said.

The national health insurance and long-term senior care insurances, both mandatory, are forecast to hit bottom in 2025 and 2028, respectively. The main culprit is soaring medical and health care spending on the increasing number of seniors.

While the government doesn’t pass on deficits in social security funds like the national pension, teachers’ pension, industrial accident compensation insurance and the employment insurance to taxpayers, it does require them to help fund national health insurance and long-term senior care insurance programs.

Currently, taxpayers pay 28.4 percent of those programs. But by 2060, they could be forced to carry 39.8 percent of the programs, with heavier monthly premiums to match.

The Finance Ministry suggested imposing higher monthly premiums on all state-run pensions and insurances, including the national pension, and health and long-term senior care insurances, while cutting back on the monthly payout.