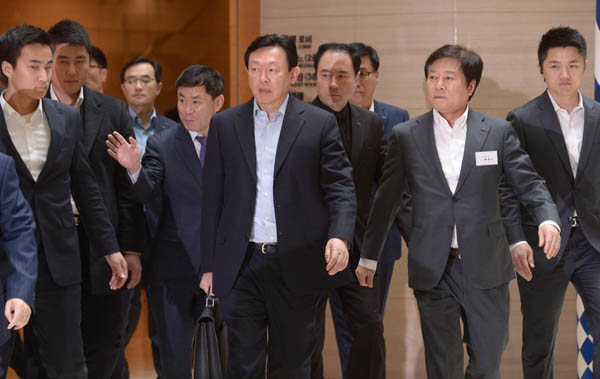 Lotte Chairman Shin Dong-bin enters the meeting with presidents of subsidiaires of the conglomerate on Friday at the Lotte Hotel in Jamsil, southern Seoul. [NEWSIS]

Lotte Group Chairman Shin Dong-bin on Friday asked his top executives to strengthen communication with customers and shareholders to improve public trust in the retail giant.

The meeting of the group’s top executives at the Lotte Hotel in Jamsil was the first meeting of senior management since the government stripped the company of one of its duty free
licenses.

While the duty free license was extended at its headquarters in central Seoul for another five years, the duty free business at its new Lotte World Mall in Jamsil, where the conglomerate had invested 300 billion won, was disapproved.

Many believed the damaged public image of the company caused by the ongoing management control feud with the older brother and former Lotte Holdings Vice Chairman Shin Dong-joo played a crucial role in the government’s decision.

The loss of Lotte World Mall’s duty free business was a huge surprise to Shin Dong-bin and will have a massive impact on the group’s revenues. Lotte is the biggest duty free operator in Korea and earned more than 400 billion won last year.

Friday’s meeting was the first where Shin Dong-bin personally attended an executive-level meeting since the controversy with his brother heightened in July when Shin Dong-joo and their father and founder of Lotte Group Shin Kyuk-ho attempted a coup that backfired.

According to Lotte Group, Shin Dong-bin asked his executives to act swiftly on changes.

“It’s difficult to find a positive signal about next year’s economy,” the chairman said. “In order to achieve our goals under such [unfavorable] circumstances, we need to act quickly on changes while strengthening our governance structure and focus our efforts on communication and cooperation.”

He told executives they have to make decisions with a long-term view of at least 10 years instead of three years into the future.

He said that employees need to enhance cooperation, not only among Lotte affiliates, academia and business partners but also with other companies to help generate lucrative results to secure the group’s future growth.

He also reaffirmed that he will proceed with the corporate governance changes he promised in the summer.

“Enhancing transparency of a company is not a choice,” Shin Dong-bin said. “Starting with the initial public offering of our hotel and information telecommunication businesses next year, we will increase the number of Lotte companies that will go public.”