From illiteracy to poetry in one year

From illiteracy to poetry in one year 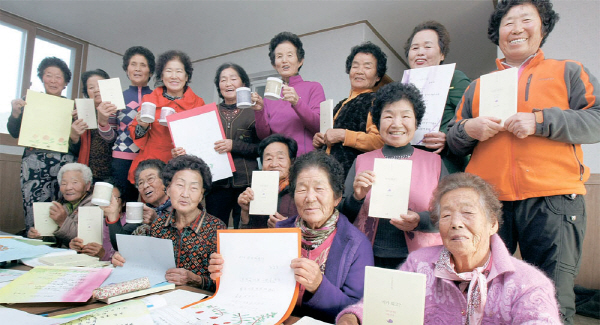 The authors display their handwritten poems on Tuesday at a community hall in Buksam-eup, Chilgok County, North Gyeongsang. One thousand copies of the poem collection sold out in two weeks. [GONG JEONG-SIK]

One thousand copies of a collection of poems written by 89 elderly people who learned to read and write in the past year sold out just two weeks after it was published in November.

The volume, titled “What is a Poem?” was written by 87 women and two men - most older than 70 - in Chilgok County, North Gyeongsang. All were illiterate until they learned how to read and write in Korean over the past year.

According to Lee Han-yi, who is in charge of Korean education for the elderly in Chilgok County, there was never any special intention behind the women writing poems aside from practicing writing. But once word got around, people pushed for the poems to be published.

“I think the world seen through the eyes of these elderly women in the countryside is appealing to readers,” said Hwang Kyu-kwan, CEO of Samchang, which published the book.

In just a few sentences each, the poems illustrate each of the authors’ thoughts and musings. One poem describes the drought that hit Korea this year and the wish for rain to come. Another gives thanks to a daughter-in-law who serves as a caregiver.

One even describes the difficulties of learning how to read and write so late in life.

The poems were published in raw form as they were written - with grammatical errors and shaky handwriting - to underscore their authenticity. The titles the authors used were also preserved.

Chilgok County published the first edition of the 151-page book in November with a 13 million won ($11,200) printing budget. Its publishing house, Samchang, released the book for 9,000 won in Kyobo Book Center as well as in online bookstores.

A thousand copies of the book sold out in two weeks, spurring publishers to print more copies.

Still, the ladies are shy about being described as poets.

“So embarrassed,” said So Hwa-ja, 72, who contributed the title for the volume, “What is a Poem?”

“I just drew some words that popped up in my mind,” she said modestly.

Kim Mal-soon, another one of the writers, asked, “Am I a poet? I am merely a countryside grandma.”

Chilgok County and the publishing house are planning to hold a promotional event for the writers, who agreed to donate all their royalties to a scholarship fund for local low-income students.

The county also plans to publish a second volume with new poems by the authors.