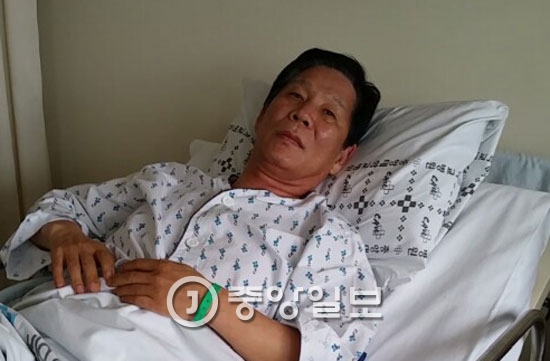 Kang Gi-woon, who worked as a chauffeur for former President Kim Young-sam for the past 22 years, lies in his hospital bed on Sunday at Chung-Ang University Hospital. [Kim Min-kwan]

A man who spent over two decades serving former President Kim Young-sam was unable to attend the democracy icon’s funeral on Nov. 26.

Instead, Kang Gi-woon, 65, watched the live broadcast of the state funeral on television from a hospital room at Chung-Ang University Hospital in Dongjak District, southern Seoul. Dressed in a patient’s gown and watching from his bed, a cast on his right leg, his face was pensive.

Kang served as Kim’s chauffeur since 1993, when the late president took office. He still works for the family.

On the day Kim died, Kang tripped on a stairwell and broke his leg. He was on his way to drive Kim’s bereaved wife, Son Myung-soon, to the former president’s wake at Seoul National University Hospital.

“My daily routine began every morning at 8 a.m., when I went to the Sangdo-dong residence [Kim’s longtime home],” he recalled.

“After his passing, I couldn’t sleep for two days, and all I did was watch the news on television and read newspapers,” he said. “As I watched his burial progress at Seoul National Cemetery, I shed tears, although I didn’t expect to.”

Kang would have driven the hearse that carried Kim to his final resting place on Nov. 26. Filled with regret, he instead watched the events on TV that day. He is hospitalized for a crack in his right hipbone.

Kim died on Nov. 22 of a severe blood infection and acute heart failure at the age of 87. The country observed a five-day mourning period before holding a state funeral for the former president.

“He was not authoritative at all and was warm toward his subordinates,” Kang said. “Even in his old age, he enjoyed singing songs in the car. He enjoyed all the songs of Yang Hee-eun, like ‘Beautiful Things’ [from 1987] and ‘Hangyeryeong’ [1985]. There were many times when he sang more recent pop songs that I didn’t even know. He would ask me, ‘Do you know this song?’ and I wouldn’t be able to answer.”

Kang also recalled that after stepping down as president, Kim would often say to him, “It’s stuffy just being at home all the time. Let’s go for a drive.”

The former president would usually be accompanied by the former first lady, and Kang would drive the pair for an hour or two to the outskirts of the city.

But as Kang watched the burial ceremony on TV and the dirt was shoveled over the coffin, he let out a long sigh. A clip of Kim and Son singing a nostalgic song played on-screen, and Kang and his wife quietly hummed along to “When You and I Were Young, Maggie.”

“When he was alive, Kim used to enjoy singing this song, so it is familiar to me as well,” he said.

Because Kang didn’t want to cause any trouble for Kim’s family, he avoided telling any specific anecdotes or detailing specific events.

“My husband holds his tongue well, so when he came home, he would never speak about anything that happened outside,” Kang’s wife said. “But he would habitually say, ‘It’s a great fortune to serve the former president.’”

Kang served as a chauffeur for the former first lady as Kim’s health deteriorated over the last two years.

He plans to retire next week.

“As soon as I am released from the hospital, I will visit President Kim’s grave and pay my respects,” Kang said.

“Even now, I feel like if I went to his residence tomorrow morning, he would affectionately scold me, ‘Why did you come so early?’ I will forever cherish the warmth that President Kim showed me.”