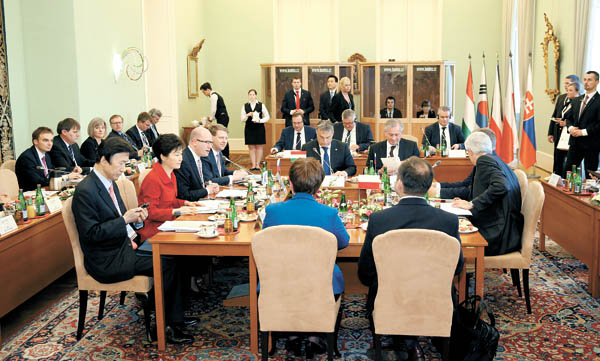 President Park Geun-hye, in red at center table, talks to the leaders of the Visegrad Group at their first-ever summit. The meeting took place at the Czernin Palace in Prague on Thursday. [JOINT PRESS CORPS]

Korea has gained a foothold in a massive new infrastructure development market in Central Europe, as President Park Geun-hye and leaders of the Czech Republic, Hungary, Poland and Slovakia agreed to form a high-level consultation body.

President Park attended a summit with the leaders of the Visegrad Group in Prague on Thursday and discussed a wide range of political, economic and cultural cooperation issues. The Visegrad Group, also known as the “Visegrad Four” or simply “V4,” is an alliance of the four countries established in 1991, and Park was the first Korean president to hold a summit with the group.

According to the Blue House, a joint statement was adopted at the summit to address a wide range of issues discussed.

The two sides “acknowledged the importance of further developing infrastructure in Central and Eastern Europe to facilitate economic growth and decided to consider establishing a V4-Korea Ad Hoc High-Level Meeting on Infrastructure, which would explore opportunities for transport and infrastructure cooperation, including highways, railways and ITS [Intelligent Transport System], among others,” the statement said.

In addition to the infrastructure investment consultation, they also agreed to establish a new dialogue to cooperate on energy policy cooperation.

“The Visegrad countries are allocated with 167 trillion won [$143 billion] from the European Union fund, and they will use more than 50 trillion won for infrastructure projects,” a senior Blue House official said. “Through this summit, Park created a path for Korean companies to participate in this massive market.”

He said the development plans of the four European countries will also contribute to Korea’s growth.

After joining the European Union in 2004, the four Visegrad countries were known as the new growth engine of the EU economy. The total gross domestic product of the four countries comprised 2 percent of the EU in 1995, but the amount went up to 5.42 percent in 2014. In 2014, the four countries showed an average 2.8 percent growth in their economies, more than double the average EU economic growth rate.

The European Union has decided to create a fund worth 430 trillion won from 2014 to 2020 to resolve imbalances among its members. Of that money, 40 percent was allocated to development of the four Visegrad countries, and they are expected to use more than 50 trillion won for infrastructure projects.

According to the Blue House, Korean companies are particularly interested in several projects in the region.

The Hungarian government will select a company for a subway improvement project in Budapest in 2016. The project is worth 2.8 trillion won.

In Poland, Korean firms are eyeing a tender for a traffic fee collection system. The decision will come in 2016, and the project is worth 58 billion won.

Korea is also interested in nuclear reactor construction in Slovakia. The country plans to build one nuclear reactor for more than 5 trillion won, with a goal to commercially operate it by 2029.

At the summit, Park and the four leaders agreed to work together to bolster their “creative economy” partnership through cooperation in science and technology and cultural fields. The countries also signed a memorandum of understanding to launch a joint research program.

Park also promoted her Eurasia Initiative at the summit and received the leaders’ support. The initiative, first presented in October 2013, aims at connecting energy and logistics links of the Far East starting from Korea to Siberia, Central Asia and to Eastern and Western Europe.

Welcoming her initiative, the four countries promised to boost cooperation with Korea in transportation, logistics and communications, the joint statement said.

The statement also said the countries will work together to promote trade and investments.

“The V4 and Korea acknowledged the economic effects of the EU-Korea Free Trade Agreement [FTA] and affirmed their readiness to create favorable conditions for economic development under the framework of the EU-Korea FTA,” it said.

In 2014, the Visegrad Group was the second-largest trading partner of Korea inside the European Union after Germany.

At the summit, Park and the four leaders discussed North Korea and urged the communist regime to stop its nuclear and missile programs and return to negotiations. The two sides urged the North to respond to diplomatic efforts to resume the six-party talks, which have been halted since 2008.

Following the summit, the five leaders addressed the press in a joint media conference.

“I appreciate the Visegrad Group’s support for Korea’s efforts to maintain peace and stability in Northeast Asia,” Park said. “We agreed to improve our communication and cooperation, including a seminar to share the four Visegrad countries’ successful transformations of their systems.”

“Korea is working hard to achieve peaceful unification, and their experiences will be important lessons for the process of the Korean Peninsula’s unification and post-unification integration,” she said.

In addition to the summit, Park also held separate bilateral talks with the four leaders.