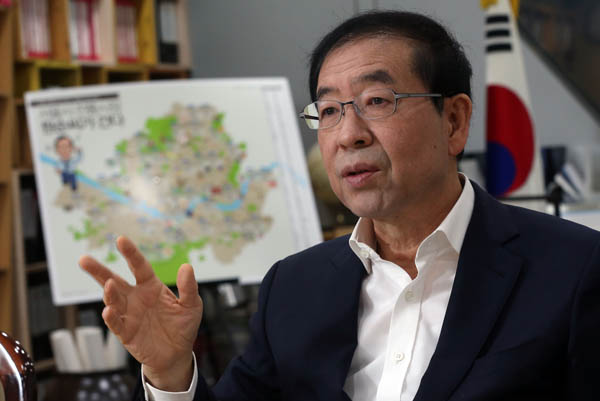 Seoul Mayor Park Won-soon talks about his plan to convert a two-lane overpass next to Seoul Station into an elevated park. [Kang Jung-hyun]

Seoul Mayor Park Won-soon pledged to build a pedestrian-friendly city with his plan to convert a two-lane overpass next to Seoul Station into an elevated park.

In an interview after the Ministry of Land, Infrastructure and Transport approved the shutting down of the overpass from Dec. 13, Park promised to make it an enjoyable place for citizens and visitors, despite an ongoing controversy.

“There are 390,000 people on average moving in and out of Seoul Station per day,” Park said. “After finalizing the reinvention project of the overpass and Sewun market, they can move to Namdaemun Market in five minutes, Myeong-dong in seven minutes and Mount Namsan in 10 minutes. If one can go to the main points of Seoul in less than 10 minutes, this car-flooded city will be changed to a pedestrian-friendly city.”

Park faced a major backlash after he officially announced the plan in September 2014 to create a pedestrian park on the 1-kilometer (0.6-mile) overpass under the code name Seoul City 7017 Project. In particular, Namdaemun Market merchants opposed the scheme, worrying about aggravated traffic jams in the area.

“At the beginning, the opposition was quite huge,” Park admitted, “because of the traffic congestion. However, I persuaded them that this could be a great opportunity. It is good, in fact, because 65 percent of the cars using the flyover are just passing by. If the overpass is gone, those cars will be detoured, and the traffic will decrease on the roads in front of the market.

“Then the number of pedestrians will increase, and the market will be vitalized on a major scale. I am consistently trying to persuade them [the merchants].”

The 45-year-old overpass was scheduled to be demolished due to safety issues. The mayor came up with the idea last year of maintaining it and transforming it into a pedestrian artery and tourist attraction, a Korean version of New York City’s High Line Park.

“In my first period as mayor [Oct. 2011 to June 2014], I thought the Seoul Station overpass was a symbol of our lives during the industrialization period,” Park said. “In Europe, alleys built during the medieval periods are used for sightseeing. I believed we had to preserve some part of our old memories.”

The 17-meter-high road will be no longer be accessible to cars starting Dec. 13. It will be transformed into a green public space from April 2017. The road will be repaired and reinforced.

“Sunken Garden” is a scheme to bring the areas beneath the overpass to life by building attractions such as cafes. The upper garden will feature four observatories, 11 cafes and flower shops, a library and a museum.

Park said it was wrong to interpret the project as a means for him to get ahead in the presidential election in 2017.

“You know how I always answer,” Park said when asked if he would run for the presidency.

“I will concentrate on running the city.”