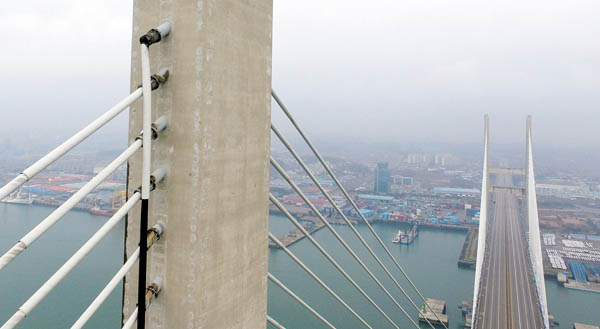 A fire broke out Thursday at 6:12 p.m. on cables of the Seohae Grand Bridge. One of the cables snapped and hit three firefighters, killing one and injuring two. The bridge will be shut down until Dec. 24 because of safety concerns. [NEWSIS]

The Seohae Grand Bridge, a major artery connecting southwestern cities and Seoul, was shut down after three of its cables were damaged in a fire Thursday evening.

The Ministry of Land, Infrastructure and Transport announced on Friday that it will suspend use of the bridge through Dec. 24 to replace the cables.

Authorities said one firefighter was killed and two others wounded when they were hit by a snapped cable while battling the blaze.

An official of the ministry said lightning was the cause of the fire.

“Despite the inconvenience, our decision was made for the public’s safety,” the official said at a televised press conference.

The official said the fire broke out at around 6:12 p.m. on Thursday. Helicopters could not reach the site due to strong winds, and firefighters were forced to climb a tower of the bridge. They finished their work at 9:43 p.m.

The Korea Expressway Corporation said the three cables extend from one of the towers to the bridge. One snapped, and two were damaged. The cables are 50 meters (164 feet) long with 280-millimeter diameters.

Each is surrounded by PVC that holds together 90 thin wires. Usually, the bridge is safe to be used with two damaged cables, but not three.

Traffic in both directions was halted on Friday, according to the Dangjin Police Station in South Chungcheong.

The 7.31-kilometer bridge, the third longest in Korea following bridges in Incheon and Busan, has mainly been used by daily commuters and weekend travelers since 2000.

It links Pyeongtaek, Gyeonggi, and Dangjin, South Chungcheong, where major heavy industries have factories and ports. South Korean authorities are conducting an investigation to verify the exact cause of the fire and additional safety checks.

Lee Byong-gon, a 54-year-old firefighter, was struck by the snapped cable and died after he was transferred to a hospital. Two other firefighters were injured but sent home after receiving treatment.