Giants’ Hwang fails to get bid from the MLB

Giants’ Hwang fails to get bid from the MLB 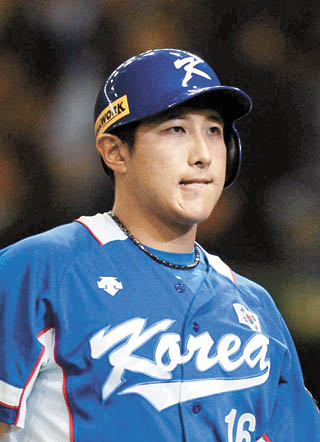 After Lotte Giants infielder Hwang Jae-gyun’s dream to play in Major League Baseball next season ended in disappointment - just like his teammate Son Ah-seop - there is growing concern over whether Korean players are too hasty to join the big leagues.

The Korea Baseball Organization announced Saturday that Hwang’s posting didn’t attract any bids from American clubs. The Busan-based team had requested Nov. 26 that the KBO post the 28-year-old, and the MLB notified its 30 clubs on Dec. 1.

The result is shocking since Son, who was posted ahead of Hwang, failed to get any bids as well. The Giants posted Son first because KBO clubs are allowed to post only one player at a time.

The result makes Hwang only the third Korean player posted to the MLB to not receive any bids, after Son. The first such case was former Doosan Bears relief pitcher Jin Pil-joong in 2002.

After Son, whose career batting average is No. 1 among active players at .323, failed to receive any bids, there was negative speculation for Hwang’s posting as well, because his offensive stats were worse than Son’s.

Hwang, who made his KBO debut in 2007 with the now-defunct Hyundai Unicorns, has hit 88 home runs and driven in 481 runs while batting .280 during his nine seasons in the KBO. For the 2015 season, the third baseman set personal records with 26 home runs, 97 RBIs, 95 runs scored, 41 doubles and a .521 slugging percentage.

Like Son, Hwang was informed of the result of his posting while away at basic military training. Both Son and Hwang, who played together in the Premier 12 tournament last month, are expected to finish training next week.

The Giants said they contacted Hwang by phone, and he said he is “fine” with the result. Hwang, who joined the Giants from the Nexen Heroes through a trade in 2010, can now either enter contract talks with interested teams from Japan’s Nippon Professional Baseball or return to the Giants for at least one more season to gain free-agent status.

But the 2012 KBO All-Star Game MVP is not likely to give up on his MLB dream. When his teammate Son was posted first, Hwang said, “I will try again to play in the MLB after I collect stats that make everyone to think I deserve to go there.”

Hwang or Son would have been the third position player to go the MLB from the KBO through the posting system.

Last week, former Nexen Heroes first baseman Park Byung-ho, who was first KBO player to be posted this year, signed a four-year, $12 million deal with the Minnesota Twins after the three-time World Series champions put up a $12.85 million bid. He became the second field player to jump from the KBO to the MLB after Kang Jung-ho broke ground last year by moving from the Heroes to the Pittsburgh Pirates.

For the Giants, the failure in posting by Son and Hwang could be good news as there is a high chance the players will return next season. However, the team said it will first try to help repair their self-esteem.

“Hwang is a strong player, so I believe he can overcome this situation,” said Giants manager Cho Won-woo. “After the two players finish their military service, we want to boost their mood and improve their self-confidence.”

Analysts point out that unlike Park and Kang, the two Giants players didn’t a have good marketing strategy to promote themselves in the MLB. Son hired a U.S. agency in January and Hwang signed with a local management company in June, but apparently these two players weren’t valued as highly as other players.

“For the back-up infielder on their 25-man roster, most MLB clubs include a player who can play in various positions, or those who have big offensive power,” said Song Jae-woo, an analyst at MBC Sports Plus. “As for outfielder Son, I think his skills besides batting weren’t impressive to MLB clubs.”

Daniel Kim, a baseball analyst who previously worked for the Cincinnati Reds and the New York Mets, said that the timing also wasn’t right for the two Giants players. According to Kim, in November and early December MLB clubs focus on signing star players, so at the time Son and Hwang weren’t their priority.

“Usually in the beginning of the hot stove league, clubs are looking to sign big free agents,” Kim said. “For players like Ryu Hyun-jin and Park Byung-ho, the clubs evaluated them as players who could instantly boost their performance, so the timing didn’t really matter. But in the case of Hwang, the clubs would have considered him after completing their important tasks first.”

As Son and Hwang failed to reach the MLB through posting, attention turns to the fate of Korean free-agent players who have announced their bids to play in the big league.