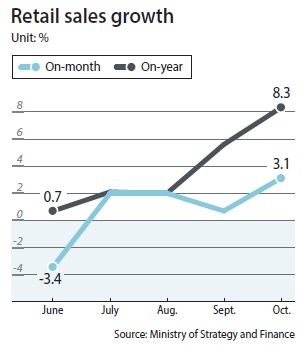 Due to a worse-than-expected economic performance, the government is considering reviving daylight saving time to boost domestic consumption, according to a local news agency.

A report by Yonhap News Agency stirred renewed controversy over the need for what is called “summer time” in Korea, and the state of the country’s economy. Although the Ministry of Strategy and Finance immediately refuted the report Sunday, the ministry is reviewing new measures to ramp up consumption next year, which is expected to be a major part of the ministry’s policy direction for 2016.

In daylight saving time, clocks are advanced an hour in the spring, allowing more daylight after working hours. People use the extra daylight for recreation and shopping. They are put back an hour in the fall.

Daylight saving time is often used during economically slow times. Japan introduced it this year. Korea and Iceland are the only two countries that haven’t adopted it among the members of the Organization for Economic Cooperation and Development (OECD).

The last time the Korean government applied summer time was in 1987 and 1988. There was an attempt to revive it in 2009 by the Lee Myung-bak administration on the pretext of saving electricity. But many people opposed, saying that with Korea’s unique workplace pressures, it could lead to people having to spend extra hours at work.

Korea already has the longest work hours among the OECD members.

According to a recent report by the Korea Labor & Society Institute, Koreans work 2,285 hours a year, beating all OECD countries.

The introduction of daylight saving time has been broached due to slower-than-expected recovery of the economy.

Despite the Park Geun-hye government’s attempts to put growth back on normal trends, the Korean economy suffered two national tragedies ? the Sewol Ferry sinking in 2014 and an outbreak of Middle East respiratory syndrome (MERS) this year ? which dealt severe blows to domestic consumption.

When the MERS crisis broke out in June, retail sales plunged 3.4 percent compared to a year earlier. The plunge was even larger than the 0.8 percent fall in retail sales in April 2014, when the Sewol sunk.

Meanwhile, the Korea Development Institute said in a monthly report on Sunday that consumption slightly improved in October, but the improvement was temporary due to a consumption tax cut. The report said overall economic recovery is still weak.

“Retail sales soared temporarily, but the overall recovery pace in private consumption appears to be modest,” the report said. “However, exports remained in a slump and industrial production showed continuing decreases in most sectors, weighing on Korea’s economic recovery.”

In November, Korean exports fell for the 11th consecutive month, although the trade surplus exceeded $10 billion for the first time.

According to the Ministry of Trade, Industry and Energy last week, November exports slipped 4.7 percent to $44.43 billion. Imports plunged at an even sharper pace, by 17.6 percent, to $34.1 billion.

“With stagnant industrial production in all sectors, the manufacturing capacity utilization rate dropped, implying that recovery momentum has not spread to all sectors,” the KDI report said.