When it comes to fashion, it’s back to the ’80s

When it comes to fashion, it’s back to the ’80s 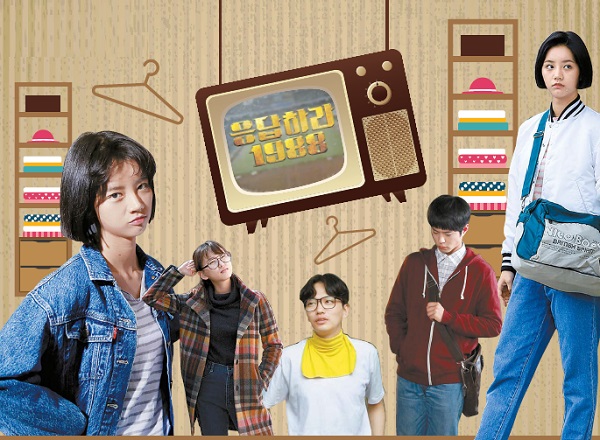 Several characters in the popular TV drama “Reply 1988” show off their ’80s style. From left to right, Deok-sun’s denim jacket, her sister Bo-ra’s checkered coat, Dong-ryong’s faux turtleneck, Taek’s checkered shirt and hoodie all represent the period’s most iconic garments. The combination of disco denim pants, baseball jumper and duffel bag that Deok-sun wears on the far right is a quintessential ’80s outfit. [EACH BRAND, TVN]

Until recently, pop culture and fashion in Korea have been all about the 1990s.

The ’90s had an influence on the runway and in street fashion as well, bringing back iconic pieces like athletic jackets and wide-legged pants.

But this fall, fashion has taken a step further back: the ’80s are the new kids on the block.

Now, as the Korean drama “Reply 1988” is becoming popular and the film “Back to the Future” (1985) has been re-released to commemorate its 30th anniversary, the ’80s is sweeping the entertainment industry.

Likewise, the fashion world is feeling the influence of the ’80s rage. Vintage looks are resurfacing, having been reinterpreted with modern brands and accessories. The styles seem to captivate youth in their early 20s who never experienced the decade, as well as adults in their 30s and 40s who are eager to reminisce.

The ’80s was memorable for the sudden rise of sports and pop culture in Korea.

In 1982, Korea’s highest-level baseball league - the Korea Baseball Organization - was first established. In 1988, Seoul hosted the Olympics for the first time.

Meanwhile, the introduction of color television made TV shows and the fashion of celebrities even more vibrant and glamorous. Movies like “E.T.” (1982) and “Dirty Dancing” (1987) and TV series including “MacGyver” and “V” became mega-hits, stirring greater interest in foreign films.

For the first time, younger kids were interested in wearing outfits other than their school uniforms, leading to changes in fashion as well.

As shown in “Reply 1988,” popular clothing among high schoolers were baseball jumpers and hooded T-shirts. Protagonist Deok-sun - played by Hyeri, a member of the K-pop group Girl’s Day - often dons a baseball jumper over a pair of high-waisted jeans. The stripes of the jumper, on the wrist and the neck area, make the style even snappier. As for Dong-ryong (Lee Dong-hui), his signature look is another baseball jumper but in a vibrant mix of yellow and blue, along with a pair of black horn-rimmed glasses. His faux turtlenecks have also elicited nostalgia.

Hooded T-shirts are one of the stylistic staples of the show, as several characters, including Deok-sun, her neighbor Jung-hwan (Ryu Jun-yeol), baduk player Taek (Park Bo-gum), don them in many scenes. Jeans that reach all the way above the navel (known as “mom jeans”) also stick out, as do the “disco pants” that are wider at the waist and bottom and tighter towards the ankle. Items like duffel bags and Nike sneakers also play critical roles in bringing back the ’80s style.

One of the trendiest looks to re-emerge has been “denim-on-denim,” or the pairing of a denim shirt or jacket with blue jeans. The style was eventually deemed tacky and all but disappeared by the ’90s, but thanks to an episode in “Reply 1988,” it’s making a comeback.

The ’80s marked a period of economic affluence and the explosion of pop culture, which served as the basis for the richness of fashion at the time. The seemingly limitless popularity of Korean stars like Lee Sang-ah, Lee Mi-yeon and Choi Su-ji, as well as foreign celebrities like Brooke Shields, Phoebe Cates and Sophie Marceau, combined with the liberalization of school uniforms and led to diverse new looks. Large sporting events like the Asian Games and the 1988 Olympics served as opportunities for foreign sports brands like Nike, Reebok and Adidas to advance in earnest into Korea. Due to the rapidly growing economy, fashion became much more diverse.

But these days, it’s the total opposite. As the nation’s economic growth has slowed, so has the development of new trends. Some experts are saying that the ’80s are once again popular because people in their 30s and 40s are having a hard time making ends meet, and are taking solace in a period they remember as being easier.

“The ’80s was a time full of glory that welcomed several key events like the Seoul Olympics,” said Kim Soo-jung, design head of casual brand Beanpole. “The idea that the favorite period for those in their 30s and 40s was the mid-to-late ’80s has led to a growing interest in the trends of the period.”

In the retail industry, people in their 30s and 40s are reportedly driving consumption of the ’80s-themed products. But in an unexpected twist, those born in the ’90s are enjoying the trend as well, finding it refreshing and fun, Kim said. She cited Adidas’s Superstar sneakers, one of the brand’s trademarks originating from the ’80s, which have become popular again since last spring. However, a considerable number of those buying the shoes today are in their 20s.

From top: faux turtlenecks and sweatshirts from Beanpole’s latest vintage collection; an ’80-style duffle coat designed by Uniqlo; Adidas’s Superstar sneakers, a streetwear staple in the ’80s; Series’s bomber parker, a reinterpretation of the flight jackets from the ’80s. [BEANPOLE, UNIQLO AND SERIES]

The fashion industry devoted this fall to ’80s style.

Beanpole launched a new collection, called “Restoration Line,” reinterpreting representative apparel from the ’80s in a fresh way. One classic item is the duffle coat. Its distinct feature is that, rather than buttons, the front is lined up with “toggles,” or log-shaped knobs that fasten the coat using loops of string. It is nicknamed the “tteokbokki coat,” as the shape of the knobs resemble the rice cakes used for the spicy Korean dish.

Beanpole is one of the casual brands, along with 8Seconds and Uniqlo, that are re-imagining the duffle coat, which in the ’80s “was equipped with painfully heavy shoulders,” Kim explained.

“In contrast, the modern duffle coat is made with doubled-layered wool and waterproof material, and overall, it is much lighter than its predecessor.”

Another hot item from this fall is the flight jacket, a favorite among men. The origin of the jacket can be traced back to World War II, when fighter pilots wore what was then called “bomber jackets.” They became a sensation when Tom Cruise slipped on the jacket in his role as a pilot in the film “Top Gun” (1987).

Recently, menswear brand Series introduced a new item to Korea, the so-called bomber parka. Though it reaches only down to the waistline, it’s nearly as warm as a parka due to the duck down filling inside.

“Emulating the retro fad and street fashion, all the major brands that specialize in menswear, womenswear and sportswear collectively are putting forth as their main item the outdoor jacket in the style of the flight jumper,” said Han Gyeung-ae, who oversees Series as the director of Kolon Industries’ fashion division.

Lucky Chouette, a brand that specializes in womenswear, also introduced its version of the bomber jacket suited for women. Kolon Sports, another brand of Kolon Industries, crafted a stadium jumper, or baseball jumper, stuffed with goose down filling to keep the wearer warm in the winter.

Sweatshirts, perhaps the most emblematic streetwear item, have also evolved greatly. Beanpole has amalgamated motifs embodying memorable objects of the ’80s - such as cassette tapes, joysticks, video games and LPs - and incorporated them into their sweatshirt designs as patterns or embroideries.

The brand has also reutilized denim jackets and pants, as well as faux turtlenecks, bringing back denim with a modern flair. Items like chino pants, which narrow at the ankle like disco pants, and joker pants, a reinterpretation of classic athletic pants, also exude the glamor of the ’80s with a hint of modern twist.

When taking on retro styles, it’s important to remember that too much can be as bad as too little.

Park Gi-soo, design head of Series’s menswear department, advised that “making every single part of an outfit retro would result in the style becoming not like the ’80s, but actually being the ’80s.

“[For a more modern look,] one should select only one piece in a given outfit to be retro,” Park added.

In other words, you can wear your bomber parka or baseball jacket - just don’t pair it with that new pair of mom jeans.

Doubling up on denim is a whole different challenge, but experts suggest that instead of layering different shades of denim, it may be more elegant to match one item of denim with other non-denim pieces of a similar color.