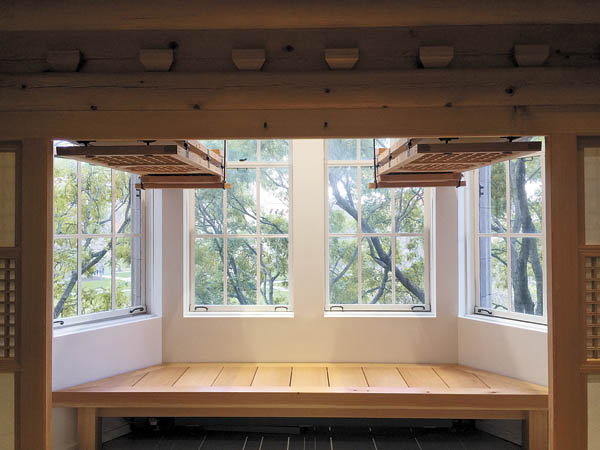 The interior of the Korean Heritage Classroom, which based on myeongnyundang, or traditional Korean lecture halls. [JOONGANG ILBO]

PITTSBURGH - After seven years of construction, the University of Pittsburgh unveiled a new facility called “The Korean Heritage Classroom.”

Located in the university’s Cathedral of Learning building, the Korean Heritage Classroom is designated as the 30th of the university’s Nationality Rooms. A proud trademark of the university, these rooms serve as study spaces for students while also paying tribute to various countries, including Armenia and China, and their cultures by basing each room’s design on the country’s aesthetics.

The Korean Heritage Classroom pays homage specifically to the myeongnyundang, which were a type of lecture hall used by students and scholars, including nobles, during the Joseon Dynasty (1392-1910). Though the term can refer to any lecture hall of that era, it is commonly understood as the lecture halls at Sungkyunkwan University, which was founded in 1398 by the Joseon Dynasty.

“Capitalizing on the framework of Joseon’s finest educational institution, the Korean Heritage Classroom echoes the same atmosphere suited for the minds of scholars devoted to scholarly research and personal development,” said Kim Bong-ryol, the president of Korea National University of Arts who helped design the project.

One distinct feature of the Korean Heritage Classroom is that, when one enters, it feels like one is entering a separate house, as there is a pair of hanok gates, which are used at the entrance of traditional Korean homes, beyond the main entrance to the room.

“I was so impressed by the Korean carpenters who were able to reconstruct the hanok classroom within the enclosed space by aligning the wood so perfectly and without using nails,” said Maxine Bruhns, a professor at the university who directed the project. Traditional Korean construction methods do not use nails.

The project came to fruition with the help of about 1,500 Korean residents of Pittsburgh and serves to recognize the large Korean community in the United States.

Lee Kwan-lee, who moved to the country in 1970s to pursue a medical career, was a member of the committee that led the fundraising and construction of the project. “I’m proud to see the Korean Heritage Classroom now standing with other Nationality Rooms that symbolize each nation’s culture and pride,” he said.

The official opening took place on Nov. 15, for which a long line of visitors waited to get a first look at the new room. In the lobby of the Cathedral of Learning there was an accompanying festival that featured several performance acts. A chorus of women dressed in hanbok, or traditional Korean clothing, sang the iconic Korean song “Arirang,” which was followed by a performance of pungmul, a folk tradition that involves drumming, dancing and singing.

A plethora of Korean food, including gimbap (rice roll) and traditional sweets and cookies, beckoned guests, particularly the local Korean residents, who shared food and happiness among themselves over the table.

“It is comforting to realize that our children can carry on our homeland’s pride by being able to study at space like this,” said Park Hyung-hye, head of the Korean Association of Greater Pittsburgh.

Kim Gheewhan, consul general of the Republic of Korea in New York, was happy to see the new room, saying, “Out of all 30 Nationality Rooms, I find the Korea Heritage Classroom to be the most beautiful and creative.”

And Prof. Park Sang-jong, who was involved with both the school’s committee and the construction process and therefore served as a mediator between the two sides, said, “As long as Pittsburgh remains to exist, the Korean Heritage Classroom will always be the platform for diplomatic relations.”